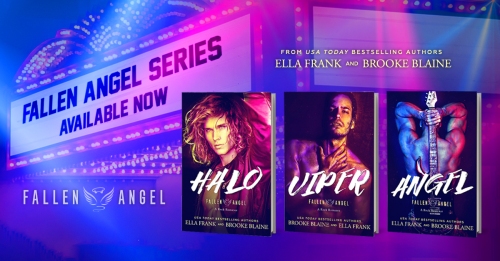 As Fallen Angel embarks on their worldwide Corruption tour, frontman Halo is forced to deal with his newfound fame, as well as his intense feelings for his bandmate, Viper.

Because now Halo has everything he ever dreamed of and one surprise he never expected: a boyfriend.

And Viper has the one thing he never thought he wanted but found himself chasing down: a relationship.

From the very beginning, they were drawn to each other, but can these polar opposites find lasting love, or will their flame burn out?

ANGEL is the third book of the Fallen Angel Series and should be read following HALO and VIPER. Halo and Viper’s story concludes in ANGEL.

Viper and Halo’s story concludes in book three of Ella Frank and Brooke Blaine’s Fallen Angel series, and in Angel, readers finally get what we’ve been waiting for since these two musicians first gave into their desire and need for one another, and while both Viper and Halo have made mistakes, shutting the other person out, allowing their feelings to overwhelm them in counterproductive ways, worrying about the repercussions to their career and their lives if they truly went all in with each other, in this final installment, they allow their love to shine bright and lead them down a new road together – one that may have a few bumps in the road but nothing that these two can’t handle as long as they’re open and honest and always run towards each other instead of away.

What I enjoyed most about the last part of Halo and Viper’s story is the fact that the authors didn’t add any unnecessary drama or over the top antics; the focus remained on the two heroes professing their love and then working each day to be truly present in one another’s life while also ensuring that their commitment to the band and their friends stay in their sights as well.

That’s not to say that Viper and Halo don’t encounter any issues along the way, but none of the conflict is caused internally; outside forces are what is driving some of the tension that exists among the band, its label, and the music industry itself. Both of them also have to come to terms with the depth of their feelings for one another, but not in the way one might think…for Viper, he needs to let go of his past in order to move forward with the love of his life, and that’s a difficult act because so much of who he is, is wrapped up into all the events that have formed him, not only his stage persona but the man behind the cocky lead guitarist.

For Halo, the only point of contention left is his family; they still don’t know the truth of his sexuality or his feelings for one of his bandmates and in order for him to truly be with Viper…to be together in every sense of the word…to be out in the open for all the world to see, Halo needs to tell his family the truth and not allow their reactions, if they don’t approve, to pressure him into giving up the love of his life. But the fact that these two decided that nothing and no one would stand in their way made things a lot less difficult than they would have been if they didn’t trust in the love they shared and the strong bond they took the time to create.

I’m so ready for Killian’s story. He’s intrigued me from the start of the series, and I can’t wait to see what Frank and Blaine have in store for him and for readers as they learn more about him and help him to find his happily ever after. 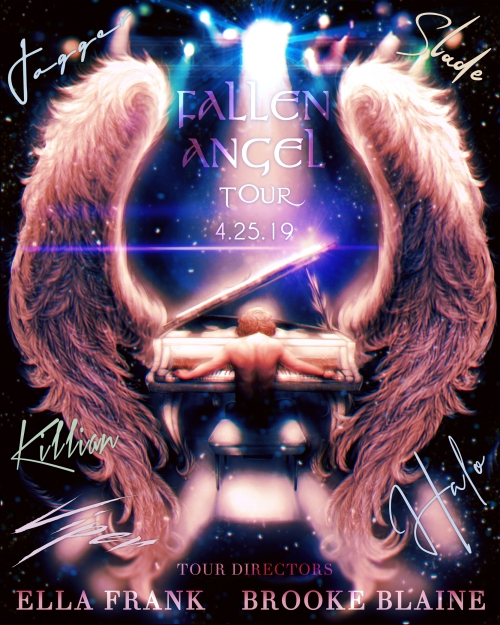 Every day is a party for Viper and the guys of TBD, the biggest rock band in the world. But it all comes to a screeching halt when the lead singer walks out of the studio one day and never comes back.

After months of lackluster auditions, Viper, the lead guitarist and resident bad boy of the group, is ready to find solace in the bottom of a bottle. Time’s running out and the pressure’s on to find a new singer, but it isn’t until an angel walks through the door that the band’s prayers are answered.

Charismatic. Talented. Magic behind the mic. Halo is everything they’ve been looking for.

With a voice to match his stunning good looks, it isn’t long before Viper’s taking notice. But there are several reasons this is a bad idea:

Too bad Viper’s body isn’t listening to his head—at least not the one on his shoulders. But you can’t fake chemistry, not onstage and certainly not off it, and Viper and Halo? They have it in spades.

As both men try to resist the fire blazing between them, and the band is forced to reinvent themselves, it’ll be a complicated rise back to the top. But from the ashes of what was, something beautiful is born. Something better. And when the world finally sees Halo stretch his wings, they’ll discover what it’s like to fall for an angel. 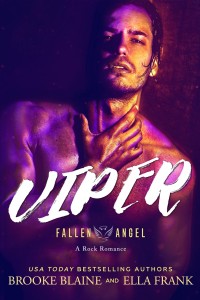 Halo, the new lead singer for Fallen Angel, never stood a chance against Viper, the legendary lead guitarist for the band.

From the moment Halo set foot in Viper’s lair, the match was lit, threatening to consume the two men with the heat of their desire. But when their casual fling begins to morph into more, will it leave the entire band in flames?

After all, it may have been Halo who fell from grace, but it’s only a matter of time before Viper falls for an angel.

VIPER is the second book of the Fallen Angel Series and should be read following HALO. Halo and Viper’s story concludes in book three, ANGEL.

You could say Brooke Blaine was a book-a-holic from the time she knew how to read; she used to tell her mother that curling up with one at 4 a.m. before elementary school was her ‘quiet time.’ Not much has changed except for the espresso I.V. pump she now carries around and the size of her onesie pajamas.

Brooke enjoys writing sassy contemporary romance, whether in the form of comedy, suspense, or erotica. The latter has scarred her conservative Southern family for life, bless their hearts.

If you’d like to get in touch with her, she’s easy to find – just keep an ear out for the Rick Astley ringtone that’s dominated her cell phone for ten years.

Join Brooke and Ella’s Facebook Group to stay up to date on the latest news!