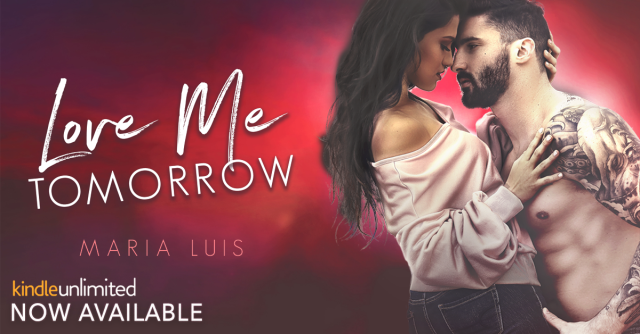 They call her America’s Sweetheart.

And me? I’m the so-called “inked god” she dumped on TV.

Until I discover that her family is opening a new restaurant next to my tattoo parlor.

If I were a gentleman, I’d offer my congratulations and go my own way.

Savannah Rose may claim I’m nothing more than a friend, but that slight hitch in her breath whenever I get too close says that America’s sweetheart is nothing but a liar.

All it takes is one scorching kiss, and I vow in her ear: “You’re going to beg, Savannah. Beg me to touch you, beg me to give you more, and if you’re real good, maybe I’ll do it all over again before you have to beg for that too.”

But Savannah Rose? She’s no one’s sweetheart but mine.

★ Add to your GR TBR: http://bit.ly/LoveMeTomorrow-GR

LOVE ME TOMORROW is Now LIVE!

1-click at the special release price of $2.99 or read in Kindle Unlimited!
💍Ebook: https://geni.us/LoveMeTomorrow
💍Paperback: http://bit.ly/LMT-Paperback

I love romances where there’s a history between the hero and heroine, even if it’s a tumultuous one. And that’s exactly what Maria Luis gives readers in her newest release Love Me Tomorrow. Savannah Rose and Owen Harvey shared a passionate connection – one that allowed them to get to know each other for them, not what others may think or assume they are. But a relationship at that point was not something that could happen, even though it’s clear that’s exactly what they both wanted.

But when these two reconnect, there’s no denying what’s between them, but if Savannah and Owen continue to allow other people’s perceptions and their own self-doubts to stand in the way of them getting exactly what they want then perhaps their feelings are better left in the past instead of brought into the present.

It’s clear that their pasts are a point of contention, which means that it most definitely needs to be discussed, and their secrets and truths uncovered – it’s the only way they can move forward as a couple. Because if they can’t let go of what was then there is no way to grab hold of what is now and what could be, which means that Savannah and Owen need to do everything in their power to deal with what ruined their first chance at being together and work toward nothing getting in their way a second time.

Savannah and Owen are realistically flawed characters – ones with secrets and ones who seem to have to fight for everything they want, especially each other. As their story continued, it felt like one thing after another threatened to undo what they were finally building together and while they persevered, there were times I didn’t know if they would be able to overcome everything and remain as bonded as they were. But it’s in those situations and scenes that the hero and heroine put everything on the line, working toward dealing with the emotional upheaval that comes with the incidences they find themselves in and what it takes to prove that the trust they have for one another is not in vain.

Love Me Tomorrow is the perfect title for Savannah and Owen’s story because that’s what they both desperately want – to love each other, today and tomorrow, with every part of who they are, and if any two people can surmount the difficult circumstances and outside interferences that seem to be working against them from all sides, it’s these two, and Maria Luis conveys that idea perfectly throughout the pages of their book.

Author Bio
Maria Luis is the author of sexy contemporary romances, though she may or may not have a few historical romances hiding in the cobwebs of her computer.

When she’s not writing about strong men and the sassy women who sweep them off their feet, Maria is a historian who specializes in medieval England and 19th century New Orleans. What do the two eras have in common, you ask? Not much, except for disease, scandalous activities and crime–Maria’s favorite topics.

Maria lives in New Orleans with her better half, where she can generally be found hiking with her two dogs, Zeus and Athena, kayaking in Louisiana’s inter-coastal waterways, or curled up on the couch with a good book.