Keyes Dixon’s life is challenging enough as a full patch member of the Disciples of Havoc Motorcycle Club but being a gay biker leaves him traveling down one tough road. With an abusive past and his vow to the club cementing his future, he doesn’t believe in love and steers clear of commitment. But a midnight ride leads to a chance meeting with a sexy pretty-boy in a wicked hot sports car that has him going down quicker than a Harley on ice.

Cocky Assistant District Attorney Alec Pierce lives in the shadow of his politically connected family. A life of privilege doesn’t equal a life of love, a fact made obvious at every family gathering. Driven yet lonely, Alec yields to his family’s demands for his career path, hoping for the acceptance he craves. Until he meets a gorgeous biker who tips the scales in the favor of truth…and he can no longer live a lie.

Can two men from completely different worlds…and sides of the law…find common ground, or will all their desires only wreak Havoc?

Badass and broken…these two terms, at face value, appear to be quite contrary, but in Kindle Alexander’s new release, Havoc, these words illustrate the two seemingly opposite men regardless of the fact that Keyes Dixon and Alec Pierce come from completely different worlds – ones that put them on opposite sides of the law and ones that attempt to control their actions, their choices, and their lifestyles in every way possible, forcing them to live lives full of frustrations, full of hiding who they truly are, disallowing them to be their ‘true’ selves due to the blowback that it would cause with Alec’s politically connected family and Keyes’ bigoted father and the brotherhood of the Disciples of Havoc Motorcycle Club.

But two alpha males, like Keyes and Alec are, can only be unsatisfied with their ‘secret’ lives for so long, especially when they finally find someone they’re willing to risk EVERYTHING for, which means that despite the fallout…despite the fact that Alec’s family image would be tarnished…despite Keyes’ brothers’ feelings about his sexual orientation, Keyes and Alec need to be who they truly are, blurring the lines between good/bad and right/wrong and taking on those closest to them in order to claim the man he wants regardless of their differences.

Keyes and Alec must contend with a significant amount of outside interference as well as their own self doubt and recriminations, but as the story moves forward and they realize just how much they’re starting to mean to each other, a decision has to be made about their future and if anything other their secret encounters can occur.

The way that Kindle Alexander crafts Keyes and Alec’s storyline focuses on just how different their lives are and just how much they’ll need to fight for what they want, and even then, there’s no guarantee that they can build a life together given the opposing circles they’re a part of as well as Alec’s mandate as Assistant District Attorney to uphold the law and not turn a blind eye when it’s broken, and while Keyes’ biker brothers aren’t as corrupt as some would think, their illegal actions are absolutely a point of contention for these two, so as their story continues in the next book, it will be interesting to see how Keyes and Alec deal with that line that both of them seem willing to cross even if it ends up getting them in to quite a bit of trouble. 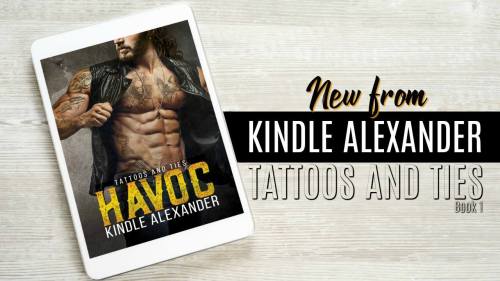 Best Selling Author Kindle Alexander is an innovative writer, and a genre-crosser who writes classic fantasy, romance, suspense, and erotica in both the male/male and male/female genres. It’s always a surprise to see what’s coming next!

I live in the suburbs of Dallas where it’s true, the only thing bigger than an over active imagination, may be women’s hair!

Usually, I try for funny. Humor is a major part of my life – I love to laugh, and it seems to be the thing I do in most situations – regardless of the situation, but jokes are a tricky deal… I don’t want to offend anyone and jokes tend to offend. So instead I’m going to tell you about Kindle.

I tragically lost my sixteen year old daughter to a drunk driver. She had just been at home, it was early in the night and I heard the accident happen. I’ll never forget that moment. The sirens were immediate and something inside me just knew. I left my house, drove straight to the accident on nothing more than instinct. I got to be there when my little girl died – weirdly, I consider that a true gift from above. She didn’t have to be alone.

That time in my life was terrible. It’s everything you think it would be times about a billion. I love that kid. I loved being her mother and I loved watching her grow into this incredibly beautiful person, both inside and out. She was such a gift to me. To have it all ripped away so suddenly broke me.

Her name was Kindle. Honest to goodness – it was her name and she died a few weeks before Amazon released their brand new Kindle ereader. She had no idea it was coming out and she would have finally gotten her name on something! Try finding a ruler with the name Kindle on it.. It never happened.

Through the course of that crippling event I was lucky enough to begin to write with a dear friend in the fan fiction world of Facebook. She got me through those dark days with her unwavering support and friendship. There wasn’t a time she wasn’t there for me. Sometimes together and sometimes by myself, we built a world where Kindle lives and stands for peace, love and harmony. It’s its own kind of support group. I know without question I wouldn’t be here today without her.