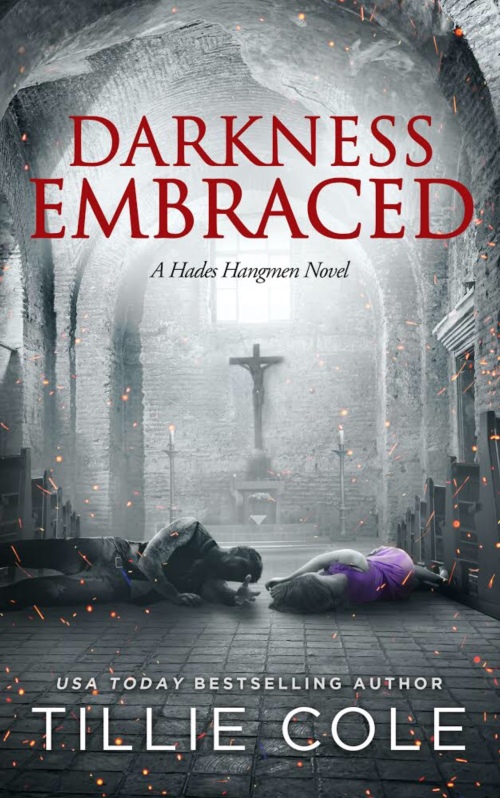 THE DEEPEST LOVE CAN BE BORN FROM THE FIERCEST HATE…

Born to sit on opposing thrones.

They were never meant to fall.

Tanner Ayers is the heir of the Texas Ku Klux Klan. Fed nothing but hate, violence, and intolerance from the day he was born, Tanner kills for his cause without remorse.

Until he meets Adelita Quintana, the daughter of the most brutal cartel boss in Mexico.

Adelita and Tanner hate each other instantly. But there is something between them that neither can explain or deny. Hate turns to desire, desire turns to love, and for the first time Tanner sees how wrong his whole life has been.

For years, Tanner does everything he can to find a way for him and Adelita. He walks away from the Klan, his family, everything he ever believed, and joins the Hades Hangmen. But now the Hangmen are at war—not only with his own family, but with Adelita’s too.

When Adelita and Tanner are thrown together again, they are forced to fight for a love that should never have been. For a love that puts them and everyone they have ever loved in danger.

And a future that seems shrouded in darkness…

Add it to your Goodreads shelf now- http://bit.ly/2CyowDc

Since the beginning of Tillie Cole’s Hades Hangmen series, I have lived and breathed the stories of these characters – I’ve raged with them, mourned with them, and faced the realties of their past and their present with much less grace than they did themselves.

Through each of the Hangmen’s books, Tillie Cole has laid out her heroes and heroines’ inner torment, baring their demons and offering all the necessary details to understand exactly who they are and how their differing worlds attempt to hold them back…to force them apart even if they fight with everything that they have to endure…to maintain a connection that makes them believe that they can be more than a product of their environment.

Hatred is an intense emotion – one that consumes, one that festers deep inside and one that finds an outlet in the most reprehensible and volatile ways, and it’s hate that could quite possibly be Tanner Ayers’ undoing because as much as he has demonstrated the man he is outside of the beliefs of his family…his people, it’s difficult, especially for the Hades Hangmen MC, to forgive and forget, but I do have to say that regardless of how warranted the Hangmen’s hatred was, Tanner continues to work to make amends…to right the wrongs he forced to occur, and it’s too soon to tell if the would be savior can truly find a way to fight his way out of the clusterfuck that he finds himself in and still keep the love of his life regardless of how much darkness they have to sift through or how much devastation they’ll have to endure.

Because of the war amongst the Cartel, the Klan and the Hangmen, Tanner and Adelita’s forbidden love has numerous obstacles against it, and no matter how hard they work to stay together, to fight for each other no matter the cost, there are too many variables at play and too many enemies that want them destroyed. And it’s amidst all of malice that life-altering revelations are unearthed, but what that means for all involved, especially for the ‘star-crossed’ lovers isn’t something that can immediately be answered because it remains unclear whether or not their connection will survive all that gets thrown at it or if it will succumb to the dark embrace that always seems to be lurking where they go.

Tanner and Adelita may come from two very different worlds, with different beliefs and lifestyles, but if everything gets stripped away, what remains are two hearts that seem to beat as one regardless of the knowledge  that a love like theirs should never exist and people will fight like hell to ensure that it doesn’t.

When we pulled up to the small chapel, I let the driver open the door and escort me inside. Candles were still lit, illuminating the dark room. I reached out to the old stone walls and smiled. I always felt safer here. At peace.

I let the rows of candles lead me along the aisle and down the stairs until I reached the place I knew Luis would be. As always, he was hunched over his books. “Adelita?” I’d shocked him. He glanced at the clock on his wall. “You’re here late.”

I checked the driver had stayed by the main door. When I faced Luis, my only true friend left here in Mexico, from childhood, I let my eyes fill with water and held up my hand, showing the ring. Luis’s eyes fell in sympathy, and his face paled somewhat. “Adelita,” he whispered. I shook my head. Luis was the one person I could let my guard down with. The only one who truly knew the real me, and . . .

“Tanner,” I whispered, and my voice caught on a pained breath. “Luis . . . what about Tanner?”

Luis rushed over to me and took me in his arms. I cried into his shoulder, hearing him lock the door behind us. Luis let me cry until my legs felt weak and all the energy had drained from my body.

Luis and I sat on his small couch. He held my hand, just like he had done, years ago, when I’d fallen for the prince of the Ku Klux Klan . . . when Tanner had had to leave me . . . and in the months, then years, when I didn’t hear from him. When he didn’t return.

“Diego was always determined,” Luis eventually said. He sighed and faced me. I knew my face would look tired and worn. Luis squeezed my hand tighter.

“Three weeks,” I said, my voice broken with sadness. I laughed without humor. “I’m sure you’ll be told come morning.”

Tillie Cole hails from a small town in the North-East of England. She grew up on a farm with her English mother, Scottish father and older sister and a multitude of rescue animals. As soon as she could, Tillie left her rural roots for the bright lights of the big city.

After graduating from Newcastle University with a BA Hons in Religious Studies, Tillie followed her Professional Rugby player husband around the world for a decade, becoming a teacher in between and thoroughly enjoyed teaching High School students Social Studies before putting pen to paper, and finishing her first novel.

Tillie has now settled in Austin, Texas, where she is finally able to sit down and write, throwing herself into fantasy worlds and the fabulous minds of her characters.

Tillie is both an independent and traditionally published author, and writes many genres including: Contemporary Romance, Dark Romance, Young Adult and New Adult novels.

When she is not writing, Tillie enjoys nothing more than curling up on her couch watching movies, drinking far too much coffee, while convincing herself that she really doesn’t need that extra square of chocolate.