RELEASE REVIEW: PLAY ME by Kelly Elliott and Kristin Mayer

PLAY ME is stand alone novel and will be an exclusive AMAZON release on March 25.

Special release week price of $2.99 and Free in Kindle Unlimited.

Are you ready for game day on March 25?

She has a head for business and a body for sin.

He is a coach who knows how to use his equipment.

Neither is looking for love.

Should be easy, right?

This might be the most important game Kendall Wales and Hunter Owens have ever played where everything is on the line.

With one wrong play, they could lose it all.

I’m a sports romance junkie; it doesn’t matter the sport or the level of competition…this tomboy just loves any and all story lines, whether they’re in the forefront or the background, that include the wide world of sports!

And, that’s exactly why Play Me by Kelly Elliott and Kristin Mayer was a no brainer ARC read…add to that the fact that the premise included an intelligent, driven, and more than qualified female general manager for a minor league football team who knows the game of football and has the determination to succeed…and then there’s the hero – an alpha male and a gentleman who is all kinds of swoon worthy and that makes Hunter and Kendall’s story a MUST READ!

There’s a bit of a love/hate relationship between Hunter and Kendall at the start, which makes sense given the fact that they’re stubborn as heck, and both are used to calling the shots. But it’s beyond clear from the start that these two have off-the-charts chemistry and will eventually give into the sexual tension surrounding them…it’s just what happens when lust and desire turn into something more…something scary, at least in Kendall’s mind, that they’re going to have to figure out because one playing offense and one playing defense when it comes to their hearts will never end in victory but rather something even more devastating than defeat.

There’s so much to love about Hunter Owens; he’s definitely the complete package and then some;) He can sweet and dirty talk with ease and the way his presence commands attention is something to behold. BUT, it’s Hunter’s resilience when it comes to one of the Mustang’s players that stands out above the rest. He never stopped trying to reach Josh…no matter how many times he messed up, Hunter kept his faith in Josh and some of the most powerful scenes in the story are the ones where Hunter works to understand Josh and make Josh see the player and the man he can be if he gets his act together.

Regardless of how strong and feisty Kendall is in her general manager position, she’s still a woman in a male-dominated profession, which means that every action she takes and every decision she makes is scrutinized by the Board of Directors, by her employees, and by her players. She can’t show weakness or it’s used against her, which means Kendall has to walk a very narrow line because it seems like everyone’s waiting and expecting her to fail. And it’s those burdens that made it easier for me, even though she did frustrate me a bit, to understand her perspective when it came to her feelings for Hunter and her need to prove herself in her career.

Hunter and Kendall’s parents added so much to the story line and Elliott and Mayer did an amazing job of illustrating just how important these relationships are…how much their mom and dad ground both Hunter and Kendall and help them to realize what’s most important in life, making sure that their lives are filled with more than just a job they love. Their bond is so essential to all of their lives and that idea is shown in every private discussion, every declaration of love, and every father/daughter, mother/daughter, father/son, and mother/son interaction.

Play Me is a sweet, steamy, sassy, and heartwarming story that focuses on the importance of balance in life and in love as well as the supportive bonds that are absolutely necessary for coping and enduring. Hunter and Kendall grow so much individually as well as, as a couple as they learn to adjust to changes and to revel in all of life’s precious gifts. I enjoyed this book so much, and I cannot wait for these two authors to collaborate for another romance read! 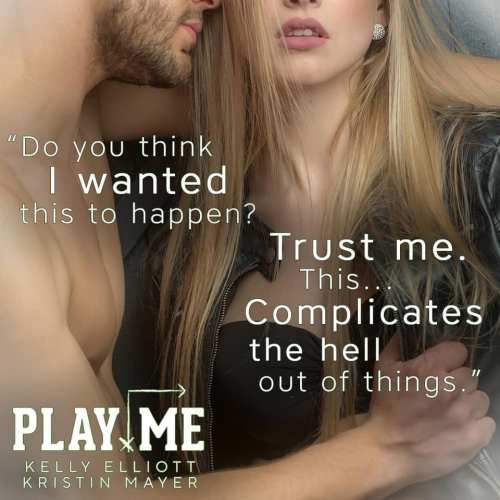 I quickly changed into my workout shorts and tank top and headed to the back of the apartments. As I approached the glass doors, I stopped short, cursing my luck. It was nearly ten. The place should have been deserted.

Why, cruel world? Why me? What have I done to deserve this punishment?

Hunter sat on a bench in the gym, shirtless, his profile to me. He had earbuds in and was clearly focused on his workout. Leaning forward, he curled a weight that was probably heavier than I was. The tattoos on his arm shifted with each movement, and I may have drooled a little bit. I wiped my mouth, hoping I hadn’t.

Walk away, Kendall. Walk away now.

I was rooted in place as I stared, taking in everything about him. I couldn’t take my eyes off him. After another set, he put the weights down and moved to a bar where he proceeded to do one armed pull-ups. How is that even possible? I’d never seen this done in real life. No wonder he’d been able to jump that fence at his ranch.

Hunter switched arms, and have mercy on me, I thought I might die on the spot. His abs were like a washboard. I’d have bet I could crack an egg on them.

I dropped to me knees and lifted my hands as pain radiated through my face. My worst nightmare had just come to life. How did I walk into the glass door? The cleaners must have cleaned really well.

I was afraid to open my eyes.

From the tingles on my skin, I knew Hunter Owens was staring at me.

Hearing a noise I turned and saw Kendall back away from the glass door and drop to the floor.

“Shit!” I whispered as I grabbed my stuff and made my way out of the gym. To my surprise,Kendall was crawling along the floor, apparently uninjured. With a smile, I leaned against the wall and watched her attempt to make her escape.

She stopped, then began to run her hands along the floor as if looking for something.

She was something else. One minute I wanted to strangler her, the next I wanted to drag her into my arms and kiss her.

I couldn’t help but notice she was slowly making her way back toward the apartments. She was dressed like she’d been planning to work out. Her shorts were riding up her ass just enough to cause my imagination to get the best of me.

Fuck, if she didn’t get up soon, I was going to do something I might regret. Instead, I reached for her arm and helped her up. My heart stopped when I saw that she was bleeding.

“Damn it, Kendall. Your nose is bleeding.”

She reached up, touched her nose, and then flinched. Drawing her fingers back, she stared at the blood on her hand. “Oh, wow. I hit it pretty hard.”

“Come on, let’s see if we can get that bleeding under control.”

Kendall seemed to be in shock because for the first time since I’d met her, she was silent.

She has a head for business and a body for sin.

He is a coach who knows how to use his equipment.

Neither is looking for love.

Should be easy, right?

This might be the most important game Kendall Wales and Hunter Owens have ever played where everything is on the line.

With one wrong play, they could lose it all.