They say New York City is the Devil’s Playground.
They’re wrong.
This city belongs to me.
And so does Aislinn Granville.

She is a pampered politician’s daughter.
A decorative ornament,
raised to smile and nod and do what she’s told.

Except… she doesn’t. Not with me. Ever.

In this city full of thugs and thieves, I’ve kept Aislinn safe.
From my enemies.
From me. 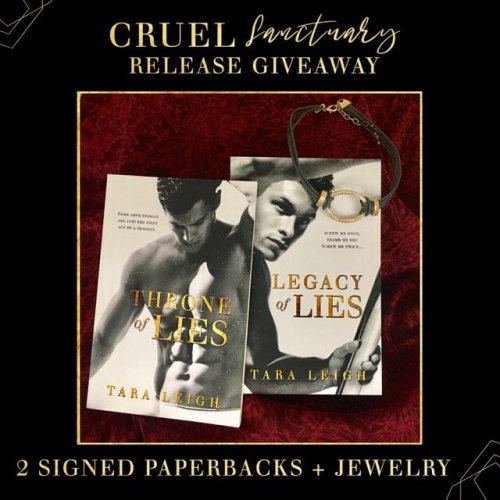 Make sure you enter Tara’s giveaway!!

A devil. A monster. A criminal. A murderer. A hacker.

All of these monikers and descriptors epitomize who Damon King is, and as Tara Leigh takes readers into his underground kingdom in Cruel Sanctuary, she introduces us to the man behind the myth, and from what we’ve learned in book one, it’s clear that this anti-hero isn’t afraid to do what needs to be done in order to achieve what he wants to achieve, regardless of the fall out or the costs of others, especially those who stand in his way.

I like that Damon doesn’t pretend to be anything that he isn’t, but I really wanted his character to be fleshed out more…I wanted more of his backstory…more insight into how he built his empire…more information about the reasons for his claim on Aislinn. I feel like there is so much to who Damon is at his core, but all I was given was the fact that he’s a bad man and as much as he wants Aislinn, he knows he can’t keep her because she doesn’t fit into his world.

Aislinn Granville is a fierce, snarky, and independent heroine – one whose ethics drive her. She’s always been on the right side of the law and a past incident makes her a victim’s advocate, risking it all to help those in need. But when her world implodes, she doesn’t know who to believe or who to trust and she finds herself being protected by a man who should repulse and scare her, not make her desire things she’s only fantasized about and willingly…or somewhat willingly…give herself to a man who defines everything that she abhors.

The main conflict in Cruel Sanctuary is quite intriguing, and there is sexual tension and angst galore. It’s clear that Damon was lying in wait to claim Aislinn as his, even if he knows it won’t last because they come from two very different worlds and have to very different views on how life is to be lived. And with everything that goes down in book one, the threat to Aislinn’s life is real but who’s willing to sacrifice themselves for her is not as clear because everything she’s believed has been turned upside, causing

I enjoyed Damon and Aislinn’s story and I’m eager to see how everything plays out in Corrupt Savior, but I will admit that the ending frustrated the heck out of me because what happens seems too easy, especially given how Damon has been when it comes to Aislinn, and I also struggled with the fact that Aislinn seems quite oblivious to the truth beneath the lies when it comes to those closest to her. It’s almost like her book smarts takes precedence over her street smarts, and while there’s nothing wrong with that fact, when it comes to who she should trust and who she should watch out for, she’s blinded by who she thinks these men are and not who they truly are or could be.

I absolutely love anti-heroes…there’s just something about their over-the-top attitude, their jerkish behavior, and their dominating ways. And I also can’t get enough of feisty heroines who aren’t afraid to put their alpha a-holes in their place, and I’m sure as this duet continues, readers will see more of these attributes resonate form the pages.

“Put me down.” I keep my cool, making the demand as stiffly as if I’m asking him to pass the salt.

But my show of composure crumbles as he angles his head to look at me. Barely an inch separates the tips of our noses. I stare, entranced by the fine scar that marks his left eyebrow. I want to kiss it.

One corner of his mouth tics up, his eyes flicking away from mine. “You look damn good in my arms.”

I follow his stare and am met by our reflection in the bathroom mirror. I blink, taking in the sight of my naked body held against King’s broad chest, the tanned, inked forearms I’d practically drooled over earlier now wrapped around my back and behind my knees.

I am naked. King is dressed.

I know what it’s like when a man overpowers a woman. When he uses force to take what’s not his. To hurt and abuse and terrorize.

And I know that this isn’t that.

It may not look like it, but I have the power in this situation. Damon King came to me. First at my apartment and now in his. He broke down two doors tonight.

I may be naked, but the only reason he’s touching me is because he knows I want him to.

Emboldened, I look away from our reflection and directly into King’s eyes again. Leaning in, I brush the tip of my nose against his. “Kiss me.”

I’ve barely pushed the words out when his lips are on mine. The taste of him is an explosion inside my mouth. Smooth and potent, but with a hint of mint. As if he swilled some of that Balvenie from his bar and then sucked on a peppermint candy.

He kisses like a conqueror. Stealing my breath along with the last of my reservations.

He kisses like a king. Staking his claim, demanding his due.

Tara Leigh is a multi-published author of steamy contemporary romance. A former banker on Wall Street, she graduated from Washington University and holds an MBA from Columbia Business School, but she much prefers spending her days with fictional boyfriends than analyzing financial spreadsheets. Tara currently lives in Fairfield County, Connecticut with her husband, children, and fur-baby, Pixie. She is represented by Jessica Alvarez, of Bookends Literary Agency.