Written With Regret, the first in an all-new emotional duet from USA Today bestselling author Aly Martinez, is available now! 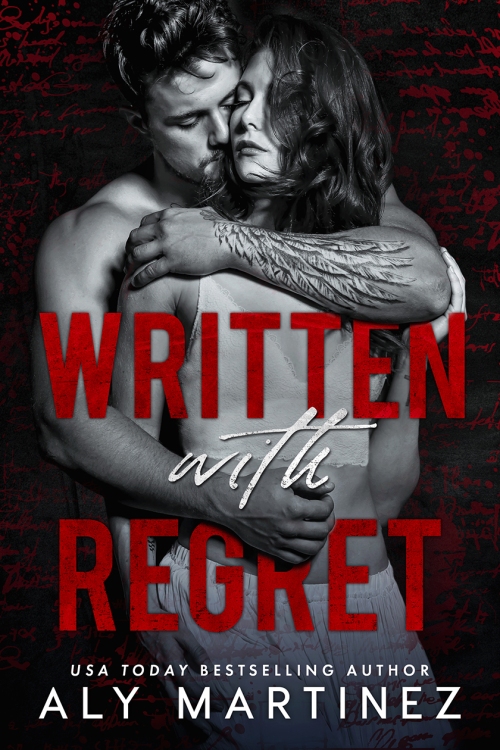 Every little girl dreams of the fairytale. The one where the white knight rushes in to save her from the clutches of evil. They fall in love, have babies, and live happily ever after.

By that definition, my life should have been a fairytale too.

When I was eight years old, Caven Hunt saved me from the worst kind of evil to walk the Earth. It didn’t matter that I was a kid. I fell in love with him all the same.

But that was where my fairytale ended.

Years later, a one-night stand during the darkest time imaginable gave us a little girl. It was nothing compared to the pitch black that consumed me when I was forced to leave her with Caven for good.

At the end of every fairytale, the happily-ever-after is the one thing that remains consistent. It wasn’t going to be mine, but there hadn’t been a night that passed where I hadn’t prayed that it would be hers.

I owed Caven my life.

However, I owed that innocent child more.

And that included ripping the heart from my chest and facing her father again. 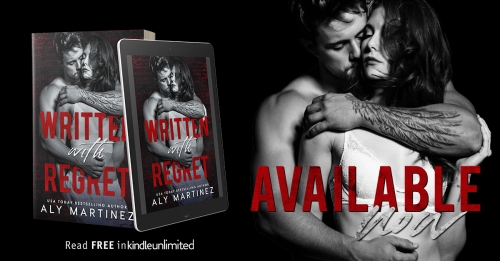 Every single time I read an Aly Martinez romance, the writing, the story line, and the characters captivate me in a way that doesn’t happen with many other writers. Martinez has the uncanny ability to craft a story that inundates me with overwhelming emotions – ones that consume my mental state and leave me emotionally drained because that’s how absorbed I become with the hero and heroine and the trials that seem to continue knocking them on their backsides, even when it seems as if they can’t take anymore.

Heading into Written with Regret, I was prepared for the cliffhanger; I’ve actually gotten pretty used to them by now. I was also prepared for the twists and turns the story line would take, knowing that every piece of the puzzle would be revealed when and if Martinez and her characters wanted them to be. So as I dove further into Hadley and Caven’s story, connecting the flashbacks and present-day scenes while also understanding exactly what kind of turmoil these two would face, not only because of the baggage of their respective pasts but the secrets that they still tightly held on, refusing to say things out loud for fear that everything between them and the most important person in both of their lives will change.

Caven learned to be a single parent by trial-by-error; it wasn’t a role he wanted to play nor did he feel it was one he would be good at, but fate didn’t care about what he wanted because it placed a precious baby girl in his care, which meant that he needed to learn quickly what it meant to have a child he is solely responsible for, and he definitely found his way in the four years that he’s had his Rosalee. And, despite the way she came into his life, he is her fiercest protector and he’ll do whatever it takes to ensure her happiness, even if it means allowing someone in her life that he shouldn’t.

The heroine in this duet is extremely flawed and her decisions will absolutely be judged by readers, and while it’s understandable given what she did, I still think that everyone needs to look at the big picture of why she did what she did and the variables that came into play – some out of her control, especially the ones that attempted to swallow her whole. Hadley coming back into Caven and Rosalee’s lives is a major upheaval for all of them, and I feel like we haven’t been privy to even half of what not only stands in the characters’ way for closure but also what repercussions they still have to face once the complete truth is revealed.

The word ‘regret’ is such a powerful six letter word; it’s a driving force in many people’s lives, and sometimes, it hangs like an albatross around their necks, refusing to let go and forcing them to suffer, even while they attempt to make amends. But I do have to say that with the title of book two, Written with You, I have hope that Caven and Hadley will find a way through the battles they’re waging with themselves, with each other, and with those closest to them. The one good thing is that these two are fighters and they won’t back down for what they think is right, even if it’s only best for the two of them and the little girl who owns their hearts.

Life had never been easy for me. Chaos had been following me like a dark cloud, looming and hovering, casting its shadow far and wide despite how bright the path in front of me should have appeared. After growing up the way I had, where happiness had been more of a privilege than a choice, I knew better than to believe that that moment would be anything other than fleeting.

And one second later, the universe proved me right.

I opened the door to see who had rung the bell—a cursory check revealed an empty hallway.

And that’s when I heard it: the sound that changed not only my entire life in the present, but my life for all future days to come.

At first, it was just a grunt, but as if that baby could feel my gaze, the minute my eyes made contact, it let out a sharp cry.

Confusion hit me like a lightning bolt, sending me back a step. I used the door frame for balance as I took in the yellow blanket with a hole only big enough to reveal a pale-pink face.

“What the fuck?” I breathed. Glancing around the hall, I waited for someone to jump out and start laughing. When no one spoke up to issue a punchline, I took a step closer and repeated, “What the fuck?”

I was utterly unable to process the absurdity in front of me.

Of course, I knew the facts.

It was a baby.

But the why in that equation was glaringly absent.

“Uhhh,” Ian drawled, peering over my shoulder. “Why is there a kid at your door?”

“I have no idea,” I replied, staring down at the squirming and now-screaming bundle. “It was just there when I opened the door.”

Ian shoved me to the side so he could stand beside me. “You’re shitting me, right?”

He looked from me to the baby, then back again. “How did it get there?”

We were two incredibly smart men who had created a technology empire out of nothing. But, clearly, a baby was too big for either of us to wrap our minds around.

I swept an arm out and pointed to the kid. “I have no clue, but I’m assuming it didn’t catch a cab.”

A light of understanding hit his eyes. He moved first, stepping over the crying baby and hurrying down the hall, searching around the corner near the elevator before returning alone.

The party continued behind me, but even with the door open, the loud chatter was no match for the ear-piecing cries happening in that hallway.

Veronica suddenly appeared beside me, her body going solid as she stammered out. “Is that…a baby?”

“Back up,” I urged, throwing my arm out to block her path as though the infant were going to suddenly morph into a rabid animal. And let’s be honest, I knew nothing about babies. Anything was possible.

Ian dropped to his knees, scooping up the wailing child. Meanwhile, I stood there like a gawking idiot, paralyzed by a weight I didn’t yet understand.

“Call the pol—” He stopped abruptly and reached into the top of the child’s blanket. “Oh shit,” he whispered, his wide, panic-filled eyes flashing to mine.

“What?” I asked, stepping toward him to get a better look at the kid. Only it wasn’t that tiny baby cradled in his arms that made my heart stop and bile rise in my throat.

There, in my best friend’s hand, was a folded piece of notebook paper that had been tucked into the child’s blanket. From the looks of it, the paper was unremarkable in every sense of the word. Blue lines, white spaces, hanging remnants from where it had been haphazardly ripped from a spiral bound notebook. Even the crease was crooked. But it was my name scrawled on the outside in messy, black ink that made it the most remarkable paper in existence.

I snatched it from his hand and, with blood roaring in my ears, opened it.

I’m sorry. I never meant for this to happen. This is our daughter Keira. I’ll love her forever. Take care of her the way I can’t.

The hall began to spin, my head feeling like every ounce of blood had been drained from my body. The thundering in my ears faded and the loud chatter of my guests, who were suddenly aware that something was happening at the door, roared to life.

And then the chaos finally found me all over again—the past playing out in my head like my life flashing before my eyes.

I sucked in a deep breath and looked at the baby in his arms. The blanket had fallen off its head just enough to reveal a patch of fine hairs, more orange than its mother’s red.

“Call the police,” I declared, turning on a toe and walking back into my apartment, leaving Ian standing in the hall with Hadley’s child.

Shoving through the crowd of concerned onlookers, I headed straight to the bottles of liquor lining the counter. I didn’t bother with ice or even a glass. I threw back that bottle of vodka, hoping like hell the burn of the alcohol could numb the panic coursing through my veins.

Through it all, that baby never stopped crying.

Pre-order the stunning conclusion, Written With You, today!

Never one to take herself too seriously, she enjoys cheap wine, mystery leggings, and olives. It should be known, however, that she hates pizza and ice cream, almost as much as writing her bio in the third person.

She passes what little free time she has reading anything and everything she can get her hands on, preferably with a super-sized tumbler of wine by her side. 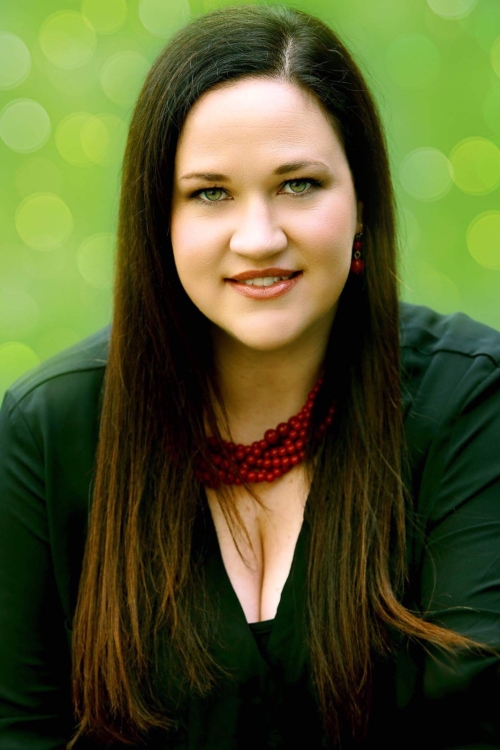 One response to “BLOG TOUR REVIEW AND EXCERPT: Written with Regret by Aly Martinez”