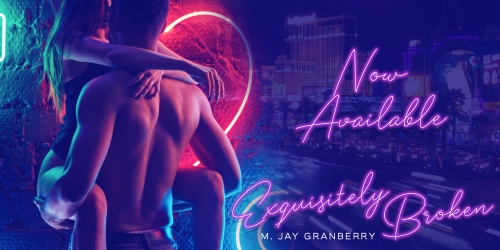 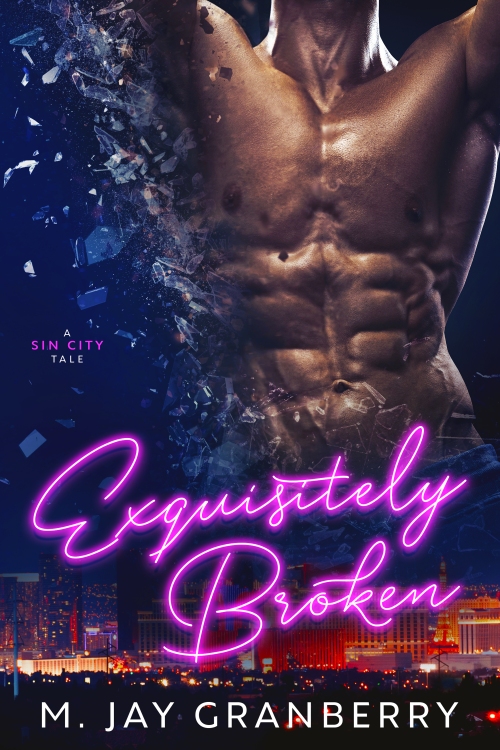 Exquisitely Broken is a second chance romance set in the glittery world of Las Vegas, Nevada.

Four years ago, one bad decision irrevocably destroyed a six-year relationship. There are some mistakes you can’t get over, some things that an apology can’t fix.

Sinclair James walked away from Jacob Johnson with her heart in pieces and her pride in shreds. She took the pain of betrayal and harnessed it, turned it into a bestselling album that changed her life. She was no longer the girl defined by what she didn’t have because she had everything, money, fame, an award-winning album. But there was always something missing. Some small shard of what use to be.

Now she’s back, her band unknowingly signing a yearlong residency to work for a new hotel on the Las Vegas Strip and subsequently Jacob Johnson.

This time he refuses to her go. He can’t. He works to prove to Sinclair he’s worth a second chance. That sometimes love can be enough to erase a disastrous past and embrace a promising future.

History seems to repeat itself as outside forces seem determined to keep them apart. But in the end their love proves strong enough to overcome the past and blaze the way for their future.

When I read the blurb for M. Jay Granberry’s debut romance, the two ideas I took away from it…the two reasons why I immediately wanted to get my hands on an ARC, were that Exquisitely Broken is set in Las Vegas and it’s a second chance love story, and if you’ve been reading my reviews, I clearly have a thing for soulmates getting another shot at forever.

Then, as I learned more about Sinclair James and Jacob Johnson’s history as well as where their lives were currently headed, I couldn’t wait to see how Granberry brought these two back together after the pain of Jake’s betrayal and how easily it seemed for Sin to walk away from the only man she ever loved.

In order to understand exactly where Sin and Jake’s relationship went wrong in the end, it’s necessary to see where they began, over a decade ago, and with that knowledge, it becomes clear that, even back then, there were so many obstacles for them to overcome and because they led such different lives with different interests and different paths to follow, the fact that they lost their way, acted out of spite, and refused to communicate six years into their relationship illustrates exactly why they’ve spent the last four years apart. But even after they broke each other’s hearts, their love never truly died and now with Sin’s band signed on to do a residency at Jake’s hotel/casino, it just might be the chance they’d never thought they’d have to let go of the past and move forward together, like they always thought they would.

I’ll be honest…I didn’t want to like Jake; in fact, for the first half of his and Sin’s story, I didn’t want Sin to take him back in any capacity. What he did broke her heart and fractured her soul in a way that’s never been repaired. But as the story went on, and Granberry allowed Jake’s voice to be heard, his perspective to be provided, I understood a bit better why he did what he did and what that act of betrayal cost, not just Sin, but him as well. I also have to say that the way he addressed Sin’s inability to fight for something worth it and how easily she ran away when things got difficult made sense to me and allowed me to see everything in a clearer light, even though I still found it difficult to get past what he did to her and their love.

Sin is such a beautiful soul and there’s a presence about her, not just because she’s stunning, but because she seems comfortable in her own skin and she’s not afraid to be who she is, even if people don’t like it. The fact that she uses her music to attempt to soothe her soul after things end between her and Jake fits the girl/woman that she is. The band’s first album, Exquisitely Broken, is Sin’s personal story – it’s the outlet she used to deal with the pain that Jake caused her. It’s a song…an anthem for the brokenhearted, and the lyrics become a battle cry – a way to release everything that coiled up inside her and demanded a way out – a necessary way to purge the painful memories. Her music is her lifeline…it’s the language she uses to speak to her fans, to herself, to anyone who has ever felt like her or been in similar situations and that idea resonates throughout the entire story line.

M. Jay Granberry crafted a steamy, angsty, and soulful second chance romance in her debut novel. I enjoyed reading Sin and Jake’s story, and I’m crossing my fingers that she’ll give me Adam and Seth’s story because I’m desperate for some insight on those two! 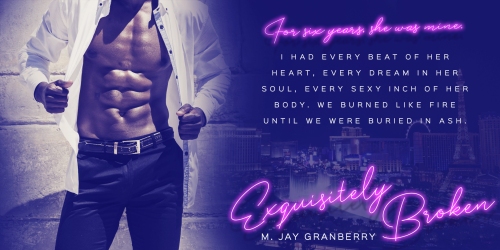 “Get up, Jake.” I’m surprised when she offers me a hand. Our fingers intertwine, and for the first time in days, I feel the frayed edges of my world begin to knit back together. I get to my feet, and she immediately drops my hand as if the contact burned.

“What do you want?” Her arms wrap tight around her middle like she’s trying to hold herself together.

I’m finally face-to-face with Sin and I’ve got… nothing. My brain is blank. Every practiced speech and contrite apology are gone. My eyes are glued to hers and fuck me, I can’t think of one word. After holding my gaze for a little less than a breath, her eyes glaze over with tears, and her teeth sink into her bottom lip to stop the trembling.

She takes a step back over the threshold, doorknob in her hand, preparing to close the door in my face.

“Hold on.” I press a palm against the door, keeping it cracked, to wedge myself between the opening. I close the space between us. The need to feel her, smell her, be in her space, and have her in mine propelling me forward. My hand slides around the back of her neck pulling her toward me. She stumbles into my arms and trips over her own feet, but like every other time we’ve touched, it’s right.

Finally, the pressure in my chest lets up, and I breathe easy. I rest my forehead against hers and whisper against her lips, “I still want you, Sin. Only you.” I close my eyes against the accusations in hers. This close, her breath is co-mingled with mine, and I can smell the faint scent of almond from her shampoo.

This time when I seek her lips, she yields but it’s not with sweet abandon. It’s stiff and tinged with regret. This kiss is heartbreak played out with the brush of lips and the slide of tongues.

Our lips pull apart and I let out shuddered breath as my heart finally rips completely apart. Instinctively I tighten my arms around her, trying to keep her close, but she pulls back. The air slips between us as easy as a knife through butter. I know what’s coming. Good-bye.

M. Jay Granberry is first and foremost an insatiable reader.

She is a true Las Vegas native, the one in Nevada not New Mexico, and to answer the most frequently asked questions about growing up in Sin City…

No, she doesn’t live in a hotel.

No, she has never been a stripper although she does know some.

And what happens in Vegas does indeed stay in Vegas.

M. Jay earned a degree in words and stories, and after fifteen plus years of doing everything other than writing, she penned her first novel.

Giving a voice to characters, that are strong yet fragile, that are sometimes uncomfortably real, that express love in dirtiest ways with the sweetest sentiments is honestly a dream come true.