“B.B. Reid gave us a delicious appetizer before the main meal, The Punk and the Plaything. Get ready for the wildest ride ever.” – Karolina, SinfulSoulRead 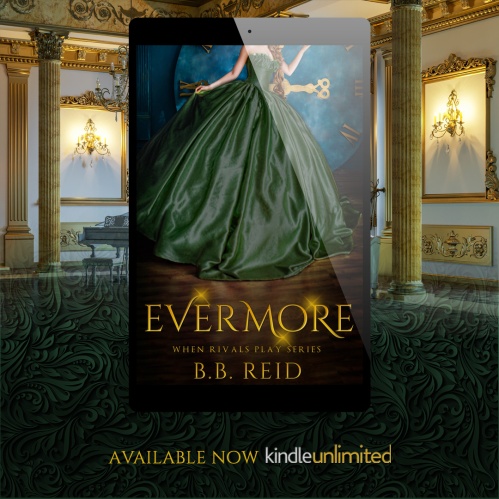 Grab your dancing shoes and put on your prettiest dress. It’s prom season in Blackwood Keep and forever can’t wait any longer!

Four Archer was the toughest girl around. Just ask anyone. She’s the street racing daredevil who brought the King of Brynwood Academy to his knees. But watching her boyfriend fawn over his childhood playmate–even though it was just an act–would be her toughest challenge yet. When jealousy rears its ugly head, Four questions if she can handle playing the sideline.

Ever McNamara has the world at his fingertips, but not even a private jet and a seven-figure trust fund can get him out of this rock and a hard place. When a childhood pact puts their fairytale in peril, Ever must risk it all to keep her.

WHAT YOU SHOULD KNOW:

1. Evermore is a 15K bonus novella that will release in ebook format only.

2. It is strongly advised that you read The Peer and the Puppet and The Moth and the Flame before diving in. Content suitable for 18+

3. You do not need to read Evermore to continue the series.

4. The audio is FREE via the Read Me Romance podcast.

5. The ebook will also be FREE via Kindle Unlimited.

6. I have not added additional content to the ebook nor do I plan to.

LISTEN TO THE AUDIOBOOK FREE!

START THE WHEN RIVALS PLAY SERIES

WEEKEND ONLY – START WHEN RIVALS PLAY FOR ONLY 99 CENTS!

Add The Punk and the Plaything on Goodreads!

I love B.B. Reid’s When Rivals Play series; the world she constructs and the characters she develops all add to the angsty feel of Blackwood Keep and more importantly, Brynwood Academy.

It’s clear that money talks and secrets reign in this town but despite the transformative power each one seems to have, those involved still have a choice and even though it’s inundated with obstacles and plagued with a slew of second guessing, the only way the heroes and heroines of this series prove themselves is by stepping up when it matters most, even if the backlash from those actions complicate things even more.

While Evermore focuses only on a single event in Four and Ever’s life, it’s a pivotal one, and while most would agree that a Prom is pretty insignificant in the grand scheme of things, what it means for Four and Ever, in terms of their relationship, makes it a monumental affair – one that will either allow Four to clearly see beneath Ever’s public facade and the childhood pact he made or confirm what has always been in the back of her mind…that Ever was never truly hers, no matter how much she wanted him to be.

I could stay with these characters forever, so I get why some readers felt this novella was too short, but its purpose was definitely achieved in the short number of pages. And the best part of is that after reading Evermore, I’m even more excited for Jamie and Barbie’s story, especially given the fact that these two rile each other up and use their words as weapons. I can’t wait to see how/when Barbie brings Jamie to his knees.

B.B. Reid is the author of nine novels including the hit enemies-to-lovers Fear Me. She grew up the only daughter and middle child in a small town in North Carolina. After graduating with a Bachelors in Finance, she started her career at an investment research firm while continuing to serve in the National Guard. She currently resides in Charlotte with her moody cat and enjoys collecting Chuck Taylors and binge-eating chocolate.