EXCERPT REVEAL: The Second We Met by Maya Hughes

Title: The Second We Met 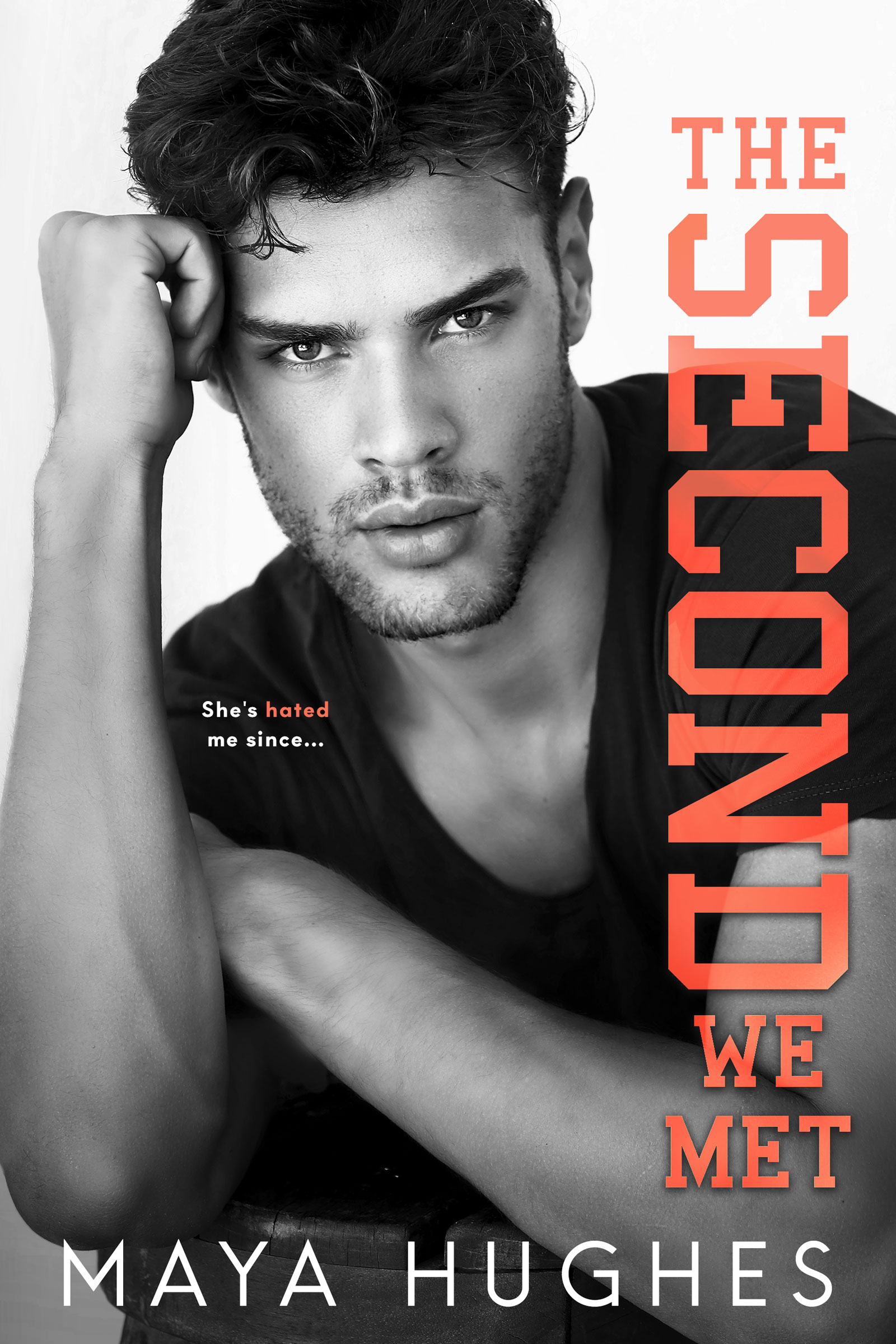 Dear Jerk Across the Street, sorry for accidentally walking in on you and catching an eyeful of your—equipment. And hard pass on the open invitation to join you in the shower “anytime”, A-hole.

That’s the note I should’ve written. Instead I sent a pleasant and apologetic version.

Had I known Phoenix “Nix” Russo would’ve been the neighbor from hell, I’d have told him right where he could shove my words.

Nix is the big man on campus with everyone lined up at his games to make sure he knows it. Sure, he’s got piercing green eyes, abs that don’t quit and a smile that could set fire to a set of panties from a hundred yards away, but he’s also the biggest pain in my ass.

Dear Pink-Haired Menace, learn how to take a joke and stop being such a kill-joy…

Elle Masterson called the cops on one of my parties—again. My sweet talking usually gets me out of trouble, but this time it got me into a nice pair of silver handcuffs. Now I’m on a reputation rehab tour with a stop at a spring break community service project.

Now we’re shoulder to shoulder, sweaty, tired and…she’s not anything like I expected. There might just be a heart under that hardass exterior. She’s invading my dreams and I can’t shake the feeling she’s the key to unlocking a piece of me that I’ve hidden away.

It’s only a matter of time until she finds out why I’m really here.

Maybe I can break through her walls and into her heart before that happens…one screw at a time.

“Do you need some help, B and E?” Nix called out from his porch, leaning against the railing with a beer in his hand.

“Not from you.” I stacked another box on top of the one in my arm and used my leg to heft them both higher. Picturing him with a beer gut in fifteen years lifted my spirits slightly.

“Don’t be silly.” He swung his body over the railing, and a solid thud landed behind me. Showoff. “Let me grab one. Those look heavy.”

I swung the boxes away. “Touch them and die.” It probably would’ve been a bit more convincing if the top box hadn’t toppled out of my arms and fallen over, spilling out some of my volunteer stuff all over the sidewalk and street, namely a jumbo box of condoms.

Everyone who’d been hanging around to get some face time with Nix watched our little tug of war, which meant everyone was now one hundred percent locked onto the two hundred blue-foil-wrapped discs splayed everywhere.

“Busy semester for you,” someone called out, and the please-open-a-portal-into-the-underworld feeling was back. Leaving the condoms, I rushed back across the street and into my house. I’d get the rest of my stuff after my shift later. Maybe the cover of night would be enough to tamp down my embarrassment.

At this point, I’d have napped on the mystery-stained couch if my sheets weren’t in the box I’d brought in. No way was I going back out there unless absolutely necessary until the semester started.

Was it too late to find another place? Yes. We’d been lucky to find this death trap.

The hard thump of a knock stopped my embarrassment spiral from pulling me down into the depths of my clown freak-out at Becky Smith’s ninth birthday. I tugged the front door open.

Nix stood there with his arms loaded with the discarded condoms. “You left these behind.” He turned up the charm, flashing dimples and everything, looking like a shiny new toy on my ramshackle porch.

“She forgot some more,” someone shouted across the street, the foil wrappers catching the later summer sun. Great, now I’d be known as the prostitute of Aspen Drive.

I glared at them and back at Nix. Grabbing the half-empty box off the floor, I held it out to him and let him dump the contents out.

The rest of his sentence was cut off by me slamming the door in his face. Really? And make my humiliation totally complete? ‘Hey guys, this is the chick who walked into the wrong house like a dumbass, gawked at me naked, and then exploded a condom factory all over the street.’ No thanks.

I was sure he thought I’d be all over him after the way I couldn’t keep my eyes off him. I slapped my hand against my forehead. I knew all about guys like him. Arrogant. Hungry for the attention of anyone around them. All about the adoring fans and accolades and expecting every woman under retirement age to throw herself at them. Screw that!

Wouldn’t you know it? My sheets were absolutely not in the box. Mystery stains and a balled-up sweatshirt would have to do.

The front door swung open and slammed shut sometime later. Jules pushed up her glasses with the back of her hand, her travel pole in its bag slung over her arm, backpack on her shoulders.

Her go-to solution for any situation was exactly what I needed right now.

She peered out the front window. “There are a ton of people out on the sidewalk blowing up condoms like balloons. What’d I miss?”

ALSO AVAILABLE IN THE FULTON U SERIES

Maya Hughes can often be found sneaking in another chapter while hiding in the bathroom from her kids! 🙂 I’m a romance writer who loves taking inspiration from everyday life, namely my husband and biggest fan. Inspiration also strikes when I hear a song, meet someone new or daydream while at soccer practice.

I’m the mom of three little ones, the wife to an amazing husband and also work full time. Some of my favorite things are cinnamon rolls, white wine, laughing until I can’t breathe and traveling with my family.