Ryan Willis has spent years in the protection business, a job that requires constant vigilance and quick thinking. His only chance to truly relax is at his secluded cabin in a small town where there are never any surprises. So when Ryan returns after an assignment and encounters a beautiful stranger, he isn’t only surprised, he’s also instantly intrigued.

Hannah Bright is a breath of fresh air, and Ryan is soon completely consumed, unable to stop from falling for her. As the two grow closer, his instinct tells him something is amiss. Yet nothing could prepare him for what he discovers when he starts digging into her past.

Hannah spends her days painting, running her arts and crafts store…and hiding too many secrets. It’s why she won’t let the ruggedly handsome bodyguard get too close. But their chemistry is undeniable, and Hannah quickly finds herself caught up in a whirlwind romance with Ryan. He is peace personified, a balm to her battered soul. Yet the gorgeous, captivating man who has swept Hannah off her feet doesn’t even know who she really is. And the moment he finds out, both their lives are at risk. 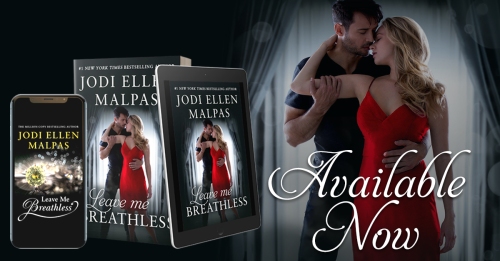 There’s something about suspense occurring in a small town setting that seems to amp up the tension and drama, add to that the fact that Jodi Ellen Malpas’ newest heroine, Hannah Bright, protectively guards her secrets, keeping those around her at an arm’s length because she and them are safer that way. But, she’s never meant a persistent and commanding man like Ryan Willis, and because he’s a protector by nature, there’s no stopping Ryan once he begins to understand what Hannah’s hiding and what he can do to ensure her safety with whatever part of her past wreaks havoc on her present.

The connection these two characters share happens fairly quick, which is not something that either of them are ready for, but regardless of that fact, they can’t stop their need for each other, and by the time everything seems to start unraveling around Hannah, she’s in deep with Ryan, which means that he’ll do what’s necessary to ensure her safety, even if it means putting himself at risk.

Ryan may not be as alpha as some of JEM’s other heroes, but it’s his softer side, his protective nature that makes him the best man to raise his 10 year old daughter as well as weather the storm that Hannah brings into his life.

One would think that Hannah’s character would be a bit too closed off given her need to hide her secrets, but when Ryan enters her life, the pull is too great and opening up to him becomes almost necessary given the danger they could be in because of their burgeoning relationship.

Leave Me Breathless is not as intense as some of JEM’s previous story lines, and it has an underlying sweetness to it that is not normally found in abundance in her books, but her ability to be more than a one-dimensional writer is why she has so many readers and why her heroes and heroines are unforgettable.

His pace doesn’t falter, and he enters the store, leaving the door open behind him. He grabs me with a gentle but possessive force, one hand on my nape, the other on my hip. And he looks me straight in the eye, breathes deeply.

Then he drops his mouth to mine and gives me the tenderest of kisses. No tongue. No moans. No movement anywhere, except for his lips gently traveling across mine. My useless hands remain by my sides. I forget my name, who I am. The world as I know it ceases to exist, and it is so welcomed. So . . . unlike anything I’ve ever experienced. It’s the smallest of gestures, yet it’s also colossal. Does Ryan know that? Does he realize what he’s doing? He’s making no attempt to deepen the kiss; his hands aren’t moving or exploring. He’s just dotting my lips with his, over and over, lazily and softly. It’s dizzying. And despite his apparent lack of desire to push it to the next level, there is passion pouring from him, the air surrounding us electric.

My mind blanks and I remain still in his hold, my eyes closed, my senses hijacked, as I savor the light pressure moving across my mouth. I can only ever remember my heart racing with fear and apprehension, yet since I’ve met Ryan it’s pounded with life and anticipation. Every near kiss we’ve had. Every moment of silence when we’re looking into each other’s eyes and the sexual tension between us ramps up another level.

Every reason to avoid him is suddenly negated by my hunger for him. And then he breaks our kiss, breathing shallowly, as he keeps me in his hold. I stare at him, lost for words, and he drops one final, lingering peck on the corner of my mouth before he moves back. I quickly feel so very lost. His fingertip draws a delicate line down the bridge of my nose, slowing when he passes over the small bump. Then he turns on an inhale and leaves, pulling the door closed behind him. And I stare forward at nothing for a long time. I’ve been kissed into a trance. I move across my store to sit in the wicker chair in the corner, the pads of my fingers resting on my lips as I stare at the door. I hear his truck start. I hear it pull away. And then . . . silence.

He just kissed me, and then he just left. Seriously, what the fucking hell?

But everything I needed to hear.

And now I’m left alone with just my screaming thoughts. Stay away from him. Run to him. I know what I want to do, but should I? Can I? I stand up and start to pace my shop, wringing my hands. I stop, feeling my lips, and then my nose. I look at the door. I hear his words.

I don’t ever want to scare you.

I’m not scared of him, not like that. I’m scared because he leaves me completely breathless

Jodi Ellen Malpas was born and raised in the Midlands town of Northampton, England, where she lives with her husband, boys, and a beagle. She is a self-professed daydreamer, a Converse and mojito addict, and she has a terrible weak spot for alpha males. Writing powerful love stories and creating addictive characters has become her passion—a passion she now shares with her devoted readers.

Her novels have hit bestseller lists for the New York Times, USA Today, Sunday Times, and various other international publications and can be read in more than twenty-four languages around the world.