“Fans are going to go completely nuts over the irresistible Bryon Crowne and his intelligent, fiery counterpart Olivia.” 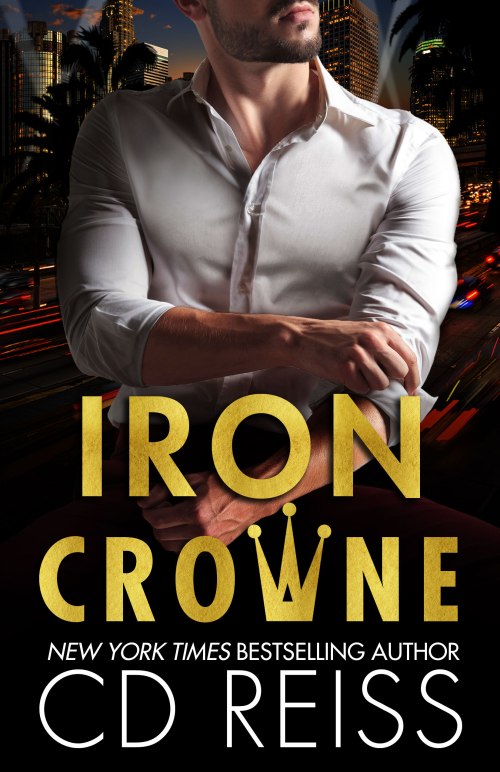 Byron Crowne is a charming liar and a gorgeous monster.

I can’t resist him.

He’s awakened desires I didn’t know I had.

Our one night stand bruises my skin and leaves dents in the walls, but the sheets aren’t the only thing we shred that night.

And suddenly, the stakes are higher than ever.

Olivia Monroe lights a fire in me that died a long time ago.

I’m a different man when I’m with her. I need to own her, take her, mark her as mine.

Everything changes when she might be pregnant and for the first time in my life . . . I’m powerless against this stubborn, untamable woman.

She’s the one in control and I have an impossible job:

Prove I’m worthy to be a father.

Avid readers of CD Reiss love her controlling alpha males and her independent and stubborn heroines, and Byron Crowne and Olivia Monroe are created in the likeness of past main characters while also defining themselves based on their backstories as well as how they choose to live their lives in the present.

Byron and Olivia are absolutely scorching, and it’s not just when they give into their chemistry and wanton desire for one another, even though it’s clear just how electric they are when it comes to foreplay and sex, and in true Reiss fashion, there are a multitude of scenes to prove just how good they are together when they’re giving and receiving pleasure.

Because these two challenge each other at every turn, testing resolves while refusing to admit just how far gone they are for one another, a rather unexpected situation presents itself and now it’s up to both of them to decide how to move forward and what their future will look like now due to the new venture they’re about to embark on.

I have to admit…I sometimes struggle with enemies-to-lovers story lines because the path that the hero and heroine take to go from hating each other to wanting one another for more than just a hate screw isn’t usually fleshed out enough to allow for real feelings to develop. It seems like the focus is too much on the volatile feelings between them and not on when things began to change and emotions turned from negative to positive.

And, to be honest, I would have liked a bit more insight into when things became more for both Byron and Olivia, especially Olivia. She seemed to always throw her disdain for Byron in his wife, even after things appeared to be progressing in a different direction. And because of her previous view that she didn’t need or want a man in her life, she had a singular focus that just wasn’t practical with the changes that were happening.

Overall, I enjoyed Iron Crowne. I’ve missed Reiss’ writing and the all-consuming way she crafts her sex scenes to illustrate just how consumed her characters are with each other. Byron and Olivia were an intriguing pair who I knew could scream at each other one minute and the next be ripping one another’s clothes off and screaming for an entirely different reason;)

“Why should I sleep with you?” I cross-examined the witness. It was the only way to manage Byron.

He considered his cup as if committing to his goal, then studied the way my finger tapped the counter as if choosing a strategy, then pondered my face as he decided on his tactic.

“Because you’re wet already,” he said with a deep knowledge of what aroused women looked like. “Because you want what I can give you. Your head hasn’t even acknowledged it, but your body knows.”

“That’s—” I was going to end in a denial, but my nipples were hard. “—not relevant. You and I don’t make sense.”

“That’s correct.” He gulped tea. I left my cup on the counter, refusing the challenge. “We are a disaster. You despise me too much to want a relationship and just enough to turn you on. And from what I can tell, you don’t want to get involved enough to force an ethical quandary. So, if you agree in principal, I have a proposal.”

Agreeing in principle meant revealing how badly my body ached for him.

“I agree in principal.”

“My proposal is one night. One full night…”

I could commit to that, and I was about to when he continued.

“You let me own you when we fuck. You come when I say. You obey me without hesitating. That’s what you want and you know it.”

My cheeks prickled, radiating the heat of my shame.

“No, then.” I pushed my cup away. “It’s never been like that. I’ve had three long relationships and a couple of flings but never—”

It was all lies… even when he spoke the truth, he lied.

CD Reiss is a New York Times bestseller. She still has to chop wood and carry water, which was buried in the fine print. Her lawyer is working it out with God but in the meantime, if you call and she doesn’t pick up she’s at the well hauling buckets.

Born in New York City, she moved to Hollywood, California to get her master’s degree in screenwriting from USC. In case you want to know, that went nowhere but it did give her a big enough ego to write novels.

She’s frequently referred to as the Shakespeare of Smut which is flattering but hasn’t ever gotten her out of chopping that cord of wood.

If you meet her in person, you should call her Christine.

Sign up to hear exclusively about audio releases and sales: https://cdreiss.com/AudioAlerts