REVIEW AND EXCERPT: THEIR FAIRY PRINCESS by Nicole Edwards 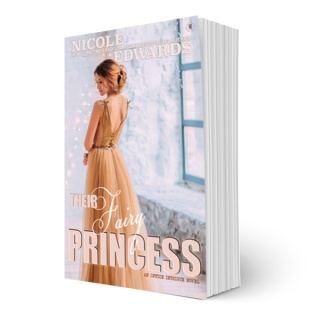 Have you ever felt … incomplete? As though happily ever after is a fleeting, unattainable concept?

Not that I haven’t had memorable experiences because I have. Plenty of them. It’s more like what’s necessary to check off all the boxes for a successful HEA hasn’t been defined yet. At least not for me.

To say my desires—not to mention my expectations—are complicated would be putting it mildly. It’s bad enough I’m in love with my best friend despite the fact we can’t give each other what we both need: a Dominant who can tame our inner submissives.

Then the unexpected happens.

Secrets are revealed, danger unfolds, decisions are made. And it’s during the ensuing roller coaster ride that five peoples’ lives are forever changed. Including mine.

I’ll be honest…heading into Their Fairy Princess, I didn’t know how things would work with five characters all being key characters in the storyline. But the way that Edwards merges their individual plot lines in a way that illustrates just how essential they seem to be to one another as well as how they come into their own when they have an outlet to experience their deepest desires without society’s stigmas or prejudices.

One person’s attack redefines all five characters’ relationships with each other and how they view life and love. And, because of the complications that arise from the attack and the feelings of insecurity that the three roommates feel, the new living arrangements allows for a judgment free zone – one where experiments can take place, new lifestyles can be tried, and perhaps, one that creates relationships that fulfill in all ways…that check off every box…that allow unbreakable bonds to form. And if those things can take place then maybe, just maybe these five people will no longer feel incomplete because they would have found a sense of completion, even if it’s in an unorthodox way.

The book focuses five people, Ian, Issac, Dante, Everly, and Heaven, trying to find their happily ever after in whatever way that may be. And, while it did take me a bit to fully immerse myself in these five people’s lives and wrap my head around each individual’s wants and needs, the baggage that they carry, and their deepest, unrealized desires, once I grasped the true dynamics amongst them, I began to see what roles they all would play in bringing one another outside of the notions they once believed in and felt comfortable with, allowing their bodies and hearts to decide the path to take instead of just their minds.

The storyline in Their Fairy Princess was not exactly what I thought it would be, but I truly enjoyed how everyone and everything evolved throughout the course of the book and what that meant for each one individually as well as with the ones who seem to own them heart and soul by the time everything is said and done. And while I did have a difficult time with Heaven, at times, the characters’ differences lent authenticity to the situations they’re involved in and added a deeper layer to both the plot line and the characters’ personalities.

There’s no question that Nicole Edwards can bring the sexy to her stories, and while I appreciate those steamy pages, what I’ve always appreciated even more is that those scenes aren’t simply crafted to be sexual fodder…what the characters experience in those encounters, what they allow them to figure out is not just their deepest needs and desires, but also what they feel makes them whole…makes them completely fulfilled.

IF SOMEONE WOULD’VE TOLD ME I WOULD one day be willingly waiting for Zeke Lautner’s sister to meet me at a kink club, I would’ve told them to lay off the sauce.

No one in their right mind would entertain the thought of engaging Jamie Lautner in any sort of kinky activity. Not if they wanted to live, anyway.

Except, that was exactly what I was doing.

Didn’t matter that I had an entire club to manage. I had somehow been roped into meeting sweet little Jamie so I could show her the ropes at Dichotomy. Not literally, of course. No way was I going to tie that girl up. I valued my balls far too much to allow that to happen. Zeke would castrate me in a New York minute if he found out.

Yet I couldn’t deny some sense of anticipation.

I had known Zeke for some time, and I’d had the privilege of meeting Jamie a time or two. More so in recent years when it seemed Zeke used her as his plus one whenever there was a function that wasn’t club related.

I tried to picture her as my little sister, but I had a hard time. It would’ve made tonight a hell of a lot easier if I could. Only then it would be weird because I couldn’t fathom introducing my sister into this world. In fact, that would be rather creepy.

Yeah, yeah, yeah. That inner voice was being a pain in the ass. Had been ever since Ransom Bishop came up with this absurd idea and Zeke had gone along with it. I had to believe Zeke was suffering some sort of mental breakdown. The man was so protective of his sister, I wouldn’t be surprised if there were a long list of injuries sustained at that man’s hands. Any man who wanted to so much as take the girl for coffee probably had endured a broken finger or two.

I shook out my hand. Like my balls, I’d grown quite attached to my fingers.

For fuck’s sake, Edge. Grow a pair, would ya?

I turned to see Angela Evans strolling my way. She was one of the submissives on duty here at Dichotomy, the red studded collar around her neck a sign that she was here in an official capacity.

“There’s a guest waiting for you at the check-in point.”

Part of me had been hoping Jamie would freak out at the last second and be a no-show. I couldn’t get that lucky.

“Thanks.” I took a deep breath and tried to calm myself. No way could I give Jamie the proper introduction if I was a freaked-out mess.

You’re a Dom, for fuck’s sake. Act like one.

I hated that damn voice, but it seemed to be there more and more these days. I wasn’t sure why it thought I needed a mental push, but there it was, always shoving me forward. It was almost as though I was stuck in a rut, and without it, I would likely find myself sitting at home, my hand down my pants as I ate pizza in front of the television.

And what? Have a beer or two? Get fat and lazy? Come up with an excuse to be alone?

As I was making my way to the front entrance, I passed Ransom and I couldn’t miss that wicked grin on his face.

Yeah, buddy. We’re doing the death march. Are you happy?

Ransom Bishop was an instigator. He enjoyed the hell out of setting things in motion. He was always inserting himself in various situations, motivating people to do things they likely wouldn’t do otherwise. All so he could sit back and laugh. Somehow, I’d fallen into his trap and I hoped for his sake I walked out the other side in one piece. Otherwise, I was going to beat him within an inch of his life.

I approached the front entrance, fully expecting to see Jamie standing there. Probably decked out in jeans and a T-shirt, not understanding what fetish wear was or why it was standard protocol in a club of this nature. However, I didn’t see anyone out of place as I scanned the area.

My eyes shifted to the bar. Two Doms were standing there chatting. No submissives. I peered into the Dom lounge, but I only noticed Mistress Jane speaking to Mistress X while four male submissives knelt on the floor at their feet.

Maybe she bolted before you could get here.

I turned, ready to head up to the front desk to see if she’d done exactly that when my gaze landed on a young woman standing to the left of the scanning room where everyone was patted down to ensure they didn’t have weapons or video equipment.

Yeah. I really needed that voice to shut the hell up. It was hard enough to breathe without his interference because … Holy Mother of God.

There was six feet of lithe brunette watching me, her long limbs drawing my attention as I took her in from head to toe. Not an inch of denim was covering her. Then again, the brown and gold corset she wore didn’t cover much of her, either. It cinched in her trim waist and highlighted her breasts, cleavage cascading deliciously over the top edge, which hugged her breasts lovingly. The brown spandex boy shorts covered her private parts but did nothing to hide those long, long legs.

I forced a smile as I composed myself, allowing my Dom face to fall into place. Ogling this woman wasn’t an option and I needed to remember that.

She smiled and her face was so radiant it damn near blinded me. On a normal day, I wasn’t one to wax poetic about a woman’s smile, but I couldn’t help it.

“Thank you.” Her chest bloomed with color and the sweet rosy red inched upward until it highlighted her cheeks. It was in that moment that I noticed how fucking young she was. She was ten years younger than Zeke, which made her twenty-three or twenty-four.

Twenty-fucking-anything was insane for me to consider. I was thirty-six, which made this girl twelve years younger than me at the very least.

It’s not like you’re old enough to be her father.

Well, technically, I probably was. Not that I’d been having sex at the age of thirteen, but it would’ve been shortly thereafter.

“Thank you so much for allowing me to come here tonight,” she said sweetly.

“It’s my pleasure to have you as my guest.”

Her brown eyes darted around and the curiosity I saw there made my dick stir with anticipation. I fought it back, reminding myself she wasn’t just any submissive who was looking to explore this world for the first time.

She was Zeke Lautner’s sister.

She was an innocent.

How the hell had I allowed Zeke to talk me into this?