His Wranglers fit him like a glove. A really tight, leaving nothing to the imagination, glove. Codie wants nothing more than to shove that Wrangler-covered butt straight into the mud.

Ace Valentine has a smart mouth, a devil-may-care attitude, and those wicked eyes aimed directly at her.

She doesn’t know what to do with that kind of attention. Especially not from the sweet-talking man that has no problem charming every woman that enters his orbit—everyone but her, at least.

Ace isn’t sure why Codie Spears had her panties in a twist when it comes to him, but every snub and insult she hurls his way brings him closer and closer to falling for her.

He’s not sure what it is about the town’s bad girl that draws his attention, but every encounter they have leaves him wanting her until there’s nothing else left to do but have her.

The only thing is, she’s been convinced by everyone around her that she’s not good enough. Tell a person that she’s a piece of trash enough times, and eventually she’ll start to believe it. It’s going to take a lot of smooth-talking and gentling on his part to get her to see that she’s worth it.

And once he has her where he wants her? Well, she’ll make a mighty fine rancher’s wife.

Herd That introduces readers to a new kind of Lani Lynn Vale hero, and I have to say…I’m excited to see how Vale’s quirky and sassy heroines make the cowboys of Kilgore, Texas, fall to their knees.

Even though Vale deviated from her usual emergency services and motorcycle club alpha males, Ace and Codie’s story still has the familiar small town feel, heart, and steam that readers have come to expect from her. And these Valentine brothers definitely bring their own brand of cowboy suave and sexiness to Kilgore, Texas, and while the reason Ace and Codie’s lives cross paths wasn’t something Codie ever saw coming because she had no intention to return to her hometown, when Ace helps her and she continues to give him hell over anything and everything, he’s all in, working his amazing backside off, both on the family ranch and to make Codie his.

The small town settings that Vale creates illustrate the pros and cons of everyone knowing everyone’s business, and the gossipers have a field day when Codie returns to the place of her crimes. Codie’s high school days was definitely not a time where she walked the straight and narrow. And it seems, that the townspeople aren’t willing to let her forget her bad girls ways. The problem is…when everyone thinks something about someone else and isn’t afraid to share their feelings excessively, the person the gossip is about tend to either act out or become reclusive, and it’s clear that Codie is not someone to choose the second option, and I can’t say that I blame her.

Both Codie and Ace have to deal with their pasts in order to move forward in their present, and while Codie has a pretty big chip on her shoulder, Ace is all about wearing her down and proving to her that she’s so much more than she or anyone else thinks she is. And this cowboy is not about to let this woman get away, and since he’s so good at wrangling bulls, I never doubted he would be able to get Codie to see things his way, even if it meant tying her up for a bit;)

Supporting characters are always a strength of any Lani Lynn Vale series, and in The Valentine Boys, there are quite a few who not only add to Ace and Codie’s story, but also seem to be complex enough to have their own story written, which I’m hoping is the case, because while the focus should most definitely continue with the Valentine brothers, there is a cast of other personalities I’d like to hear more about.

I’m so in for Lani Lynn Vale’s take on tight Wrangler wearing cowboys, and if these Valentine brothers are anything like her other alpha male heroes, I can’t wait for every last one of them to have their stories told. Bring on book 2! 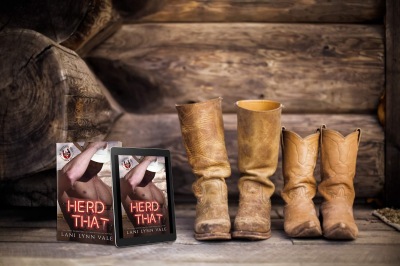 One response to “REVIEW: HERD THAT by Lani Lynn Vale”