RELEASE BLITZ: Fake It ‘Til You Break It by Meagan Brandy 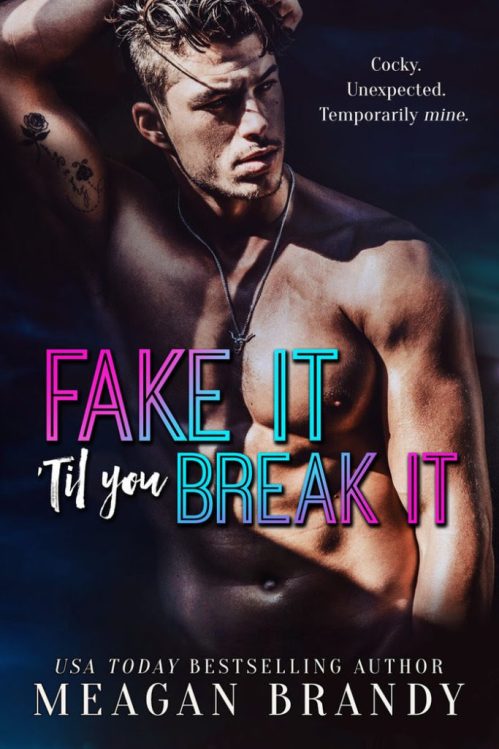 FAKE IT ‘TIL YOU BREAK IT

That’s what we are.

That’s what we agreed to be.

I thought it would be harder, convincing everyone our school’s star receiver was mine and mine alone, but we played our parts well.

So well, the lines between us began to blur until they disappeared completely.

The thing about pretending, though, someone’s always better at it, and by the time I realized my mistake, there was no going back.

I fell for our lie.

And then everything fell apart.

It turned out, he and I were never playing the same game.

He didn’t have to break me to win.

But he did it anyway.

When I read the blurb for Meagan Brandy’s newest release, Fake It ’Til You Break It, I immediately started thinking about some of the quintessential teen romantic comedies that I’ve watched and loved for many years.

FITYBI uses a tried and true premise that centers around the popular football star and the smart, shy girl striking a deal for both of their benefits, not knowing that their plan would cause such an uproar and lead to places and feelings that they didn’t think possible.

I’ve read quite a few stories where the hero and heroine began as a fake couple but then slowly transformed into something real…something they both wanted, but didn’t know how to make a reality when everything was based on false pretenses when it started. And that’s definitely part of the obstacles surrounding Nico and Demi as they get their fake relationship up and running and find themselves wanting to step across the line that keeps them squarely in the fake zone.

Because Nico and Demi were never friends until they decided to undertake this crazy fake romance, anything real feelings between them grow slowly, which is exactly how it should work. The slow burn that Brandy crafts allows her hero and heroine to get past the walls that they both have up and get to know the real Nico and Demi – the ones behind their monikers and positions in their high school social dynamics.

Nico appeared to be something completely different than who he is at his core, but I feel like that was deliberate on his part…it allowed him to guard his heart…to protect himself against anyone or anything that could wreak havoc on his life, and while he didn’t see Demi being anything more than a means to an end, what he finds with her is something he’s bound and determined to keep.

I have to say…I’m glad that Demi is nothing like Raven – the heroine from Brandy’s Brayshaw High series. Demi is not outspoken but one of her best qualities is her fierce loyalty to those who matter to her, so I guess in one way, her devotion matches Raven’s. Demi feels more relatable to readers because of her personality and how she views things, and I loved watching her come into her own and be exactly who she wanted and needed to be .

What I love most about the dialogue that Meagan Brandy crafts for her characters is how much what they say is based on their differing personalities as well as what they bring out in each other when they’re together. The witty banter between Nico and Demi spoke to who they were at their core and just how easy it was for both of them to pretend to like each other. Another aspect of storytelling that Brandy does with ease is the angst factor. I have yet to read a book by her that doesn’t revel in all the angsty goodness that she weaves in among the pages of her books.

I liked how FITYBI had a much different feel from Brandy’s Brayshaw Boys; it was a great change of pace and it allowed her storytelling to keep many of the techniques she used in her other stories but also allows for an expansion of her writing, stylistically and creatively.

Meagan is a cookie dough crazed, jukebox junkie who tends to speak in lyrics. Born and raised in California, she is a married mother of three crazy boys who keep her bouncing from one sports field to another, depending on the season, and she wouldn’t have it any other way. Starbucks is her best friend and words are her sanity.