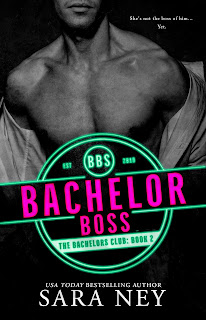 What is The Bachelors Club?

It’s a gentleman’s club—like the dignified men of the past used to have. Except, we’re not gentleman, and we’re not dignified.

We’re ineligible bachelors, bored, jaded and not looking for relationships. Quite the opposite actually. So committed to being single, we’ve created a high stakes bet to see who can remain single the longest…

Four days co-habitating in a shared work space shouldn’t be a big deal. It shouldn’t be distracting. But Spencer Standish saw me puking in a company trash can, and won’t let me live it down. Cheerful, aggravating Spencer, who wants me to fetch her coffee.

As if she’s the boss of me.

Let’s face facts: I can’t be in a relationship; not when there’s a bet to win—not with Spencer, who loves my uncontrollable basset hound, lazy Sundays, and grilled cheese as much as I do. I refuse to fall for her.

I will be the last Bachelor standing.

Sara Ney is the USA Today Bestselling Author of the How to Date a Douchebag series, and is best known for her sexy, laugh-out-loud New Adult romances. Among her favorite vices, she includes: iced latte’s, historical architecture and well-placed sarcasm. She lives in the Midwest, collects vintage books, art, loves flea markets, and fancies herself British.

For a list of cities/venues Sara will be signing at, or to purchase signed books, please visit her website at http://www.authorsaraney.com