Do people say they hate someone’s guts so that they can still fall stupidly, head-over-heels in love with the other parts?

Asking for a friend.

Okay, fine. I’m not asking for a friend.

I’m asking for me—and I’m begging you to tell me that the practice of falling in love with your should-be-enemy is common.

Please tell me that I’m not the only person to track down a guy—who used to be Hollywood’s baddest bad boy before he left LA for good—at his off-the-grid cabin in Alaska, show up unannounced, and find him gloriously naked.

This probably happens all the time…right?

Tell me I’m not alone in my stupidity—that I’m not the only woman who would fall for gorgeous blue eyes and a sexy devilish smirk, even if they belong to a broody, mysterious jerk.

For the love of everything, I need all the supportive girl power I can get if I’m going to convince Luca Weaver to come back to Hollywood—otherwise known as the place he hates so much that he ghosted Oscar-level success and escaped to no-man’s-land for the last eight years just to avoid it.

Yeah, don’t worry—that smoke you’re smelling isn’t your house catching fire as you read this…it’s just my career and what was previously known as my heart going up in flames.

Gah. Is it just me, or am I totally, completely, and utterly screwed? 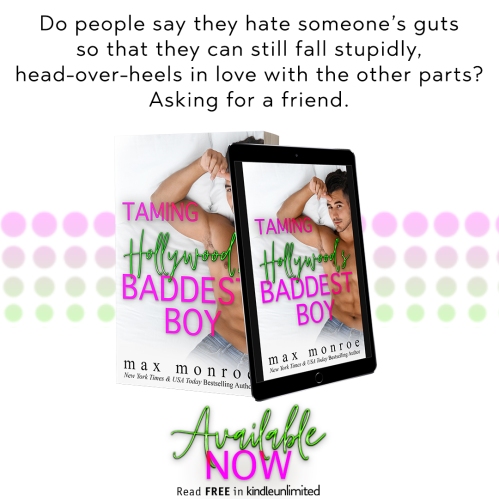 There’s not a Max Monroe book that I haven’t thoroughly enjoyed reading, and it’s because this writing duo doesn’t write the quintessential elements of a romantic comedy; instead, they put their own spin on certain components and then create dynamic characters who bring their personal flair to the plot line, adding the perfect amount of sass, steam, and humor as well as a collection of awkward and laughable scenes that keep their readers entertained until the very last page.

The fact that there are two completely opposite settings in the story adds an intriguing dynamic to the book. Alaska and Hollywood couldn’t be more different, which makes sense given the fact that Luca left Hollywood behind and everything that defined it in order to get his feet back under him, away from the limelight and his less than stellar reputation. And the fact that Billie needs him to return to the Hollywood lights is definitely a point of contention between them and, in some ways, it’s so much more than a deal breaker.

Some of my favorite scenes in the story are when Billie joins Luca on his hike in Alaska. It’s clear that she has no clue how to maneuver in the wild and Luca doesn’t make things any easier for her. In his time away from Hollywood, he’s deliberately led a solitary life, so the fact that some woman tracks him down just to pull him back into a lifestyle that he no longer wants to live doesn’t sit well with him and he makes that plain as day to Billie and to readers. The push and pull between them, not just when it comes to his return to Hollywood, is what most of the first half of their story is about, so when it’s time for Billie to return to California, there’s an uncertainty whether she will go back alone or with someone who means so much more to her than a simple career move.

I found it interesting that readers saw many different sides of Billie and Luca’s personalities in the two locales. And it makes sense that their behaviors would be determined by the environment they were in and the people or lack of people who surrounded them. I do have to say that I would have liked to understand a bit more about how Luca got his bad boy moniker because while he’s definitely gruff and stubborn, I didn’t really see any part of him that needed to be ‘tamed.’ I feel like there was more to the story that readers weren’t given when it came to the man Luca used to be. And when I added that to the couple’s separation after they started building a solid foundation together as well as the lack of communication and the trials and tribulations they had to contend with in California, I felt like I was reading two very different stories, which wasn’t all bad…but I guess I just would have liked both sides to be on equal footing, providing all the necessary insight to truly grasp why these two characters said what they said and did what they did.

Naked lumberjacks are all the rage. Or is it that they’re full of rage?

I’m not entirely sure, but I think maybe, just maybe, it’s a little bit of both.

Standing beside a hot tub outside of a rustic Alaskan cabin is a bare-chested, handsome-as-hell lumberjack of a man, and he is as naked as the day he was born.

And holy hell, what a question that is.

I started this journey in a meeting in LA, promising my boss the world, continued it with a plane, a car, a hike and kayaking adventure in a cold, rainy Alaskan setting, and in a highly unanticipated twist, I’m ending it in what must be an issue of Playgirl magazine come to life.

And boy oh boy is the centerfold pissed…

“Hello?” he questions harshly. “I said, who the hell are you?”

As hard as it is, given his clothes-less state, I force myself to take a good, scrutinizing look at the rest of his face. I’m here for a reason, and with nothing more than a ramshackle convenience store owner named Earl’s vague instructions to go on, I can only hope that the here I’m at is the here I’ve spent days in a plane, car, and kayak looking for. In addition to a remarkably carved line on the inside of each hipbone, the angry man standing boldly above me has a strong jaw covered by a beard, a little scar above his right eye, miles of muscular, tanned skin, and messy, light-brown hair. I have to look a little closer to confirm my conclusion through the rolling waves of distrust and hatred coming off him, but when I focus hard enough, the star-quality glimmer in his eyes is undeniable.

For the love of pancakes at a Sunday morning breakfast, it’s really him.

Luca Weaver, Hollywood’s former baddest boy—the man I’ve nearly killed myself to find—is right in front of me, and he is naked.

At my non-answer, his jaw turns to stone. “I asked you a question. Either answer it or get fucking moving.” I jolt at the rumble of his voice, but my feet do nothing to take me in any direction. I am rooted to the spot, utterly awed over the fact that I’ve actually managed something as impossible as finding Luca Weaver and all of my normal functions are rendered useless. He scowls, unimpressed with all the hard work I’ve put in—work that he obviously doesn’t know about. “You have five seconds before I come back out here with my shotgun.”

“Uh…” I fumble, trying like hell to grasp the English language once again. I may be distracted, but on some level, I understand the importance of getting my shit together enough to at least prevent a shotgun from joining our little meet-and-greet.

But my brain is bus-y. And slow.

Because Luca Weaver looks damn good without any clothes.

Eight years older since the last time he graced the covers of Hollywood gossip magazines, Luca is a man to whom time has been seriously kind. Either his genetics are just that good, or there’s some kind of sexy voodoo in the Alaskan water.

I mean…his penis is right in front of me, and I can’t find a single thing wrong with it. It’s straight and veiny and perfectly pink.

“What’s the matter with you? You have a death wish or something?” he spits at the statue formerly known as my body. “This is private property.”

His words are serious and firm, and it seems that maybe I do have a dream that’s reminiscent of the movie Fargo—fingers crossed there are no wood chippers nearby. Because for as much as I try, I can’t stop looking at my new phallic friend, even to form a few simple words.

But, come on. Luca Weaver’s freaking dick is right there!

Shit, I’m in the presence of penis royalty, and I suddenly have the urge to curtsy.

He is a lumberjack fantasy come to life. Instantly, my brain starts thinking about pine-scented flannel and chopping wood and giving a blow job… Wait…what?

Stop being a moron and speak words!

He glances down, mutters something to himself, snags a towel from a few feet away, and wraps it around his waist. “I didn’t invite you here,” he says, his voice gritty with irritation—and maybe, a little with disuse. Which would make sense. It’s taken me an entire season of Running Wild with Bear Grylls to get here. I can’t imagine he’s having book clubs and dinner parties and gabbing with his pals on the regular.

Towel adjusted and glorious goods hidden from view, he studies me with frigid blue eyes and a glare worthy of a scorned woman. I shiver.

“I’m only going to ask you one more time. What in the hell are you doing here?”

I fiddle with the edges of my shirt as I finally find my vocal cords. “I’m Billie…Billie Harris.”

And I am in way over my head.

A duo of romance authors team up under the New York Times and USA Today Bestselling pseudonym Max Monroe to bring you sexy, laugh-out-loud reads.

Max Monroe is the New York Times and USA Today Bestselling author of more than ten contemporary romance titles. Favorite writing partners and long time friends, Max and Monroe strive to live and write all the fun, sexy swoon so often missing from their Facebook newsfeed. Sarcastic by nature, their two writing souls feel like they’ve found their other half. This is their most favorite adventure thus far.