I, Faith Parisi, love my life. I have the best job—resident sex-advice diva for Visage magazine—I have the best friends, and I live in the best city in the world. Things are pretty damn fabulous. That is, until Henry “Harry” Sinclair III comes crashing back into my world like a bad case of herpes.
I hate the way Harry’s lip curls in contempt whenever he sees me. I hate his bright blue eyes and those inexplicably offensive dimples. I hate his stuffy English accent and the stick that’s permanently jammed up his aristocratic ass. More than anything, I hate that he’s now my boss.
But my professional prospects start to look up when a chance at writing Visage’s big summer feature falls into my lap. Success won’t be easy. I’ll need to let go of all my inhibitions—not that I have that many of those—and jump, stiletto heels first, into a hedonistic new world. An exclusive, secretive world, filled with leather, latex, and Manhattan’s elite.
Pulling this off will take every ounce of daring I have, and every ounce of focus. I can’t afford to get distracted by anything, least of all my new boss, his arrogant mouth, or the way the ice between us seems to be slowly melting away… 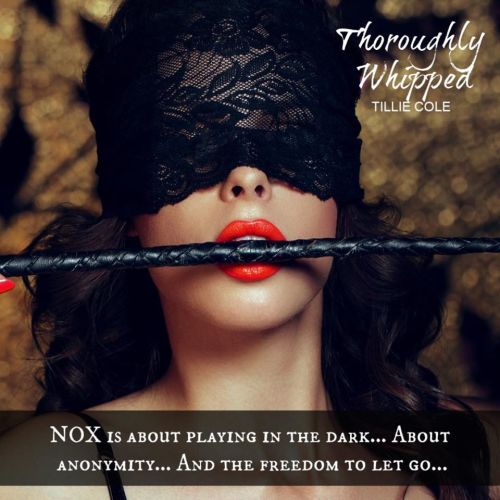 Authors who move throughout a variety of genres, effortlessly, speaks to, not only their capacity to envision and craft diverse story lines and characters but also to their ability to keep their readers engrossed in whatever setting and subject matter they deliver. And while romantic comedies are a hard sell for some romance readers, especially those used to much darker romances from the creative mind of Tillie Cole, Cole’s new release, Thoroughly Whipped, illustrates just how dynamic of a writer she truly is.

Cole’s heroine, Faith Parisi, owns this story. Her personality, her voice…every part of her resonates from the pages of this story, and it’s her sass and spunk that will have readers in fits of laughter and more than a little embarrassed for her clumsiness, both with her words and her actions. But Faith owns who she is and those around her can’t help but fall under her spell because her sweetness, her laughter, and her charisma are addicting.

Harry couldn’t be more different than Faith; it was a point of contention when they were around each other in the past and now that Harry is her boss, things continue to head toward the awkward and annoyed stage, partly because Faith’s colorful personality is in direct contrast to the cold and sterile life Harry lives. But Faith has a way about her that makes Harry’s demeanor change and allows him to see what he should be doing in all areas of his life.

Faith and Harry’s story is a steamy and hilarious enemies-to-lovers, workplace romantic comedy with a bit of Tillie Cole’s edginess and spiciness, especially when it comes to the scenes at NOX!

“Holy shit,” Novah whispered, leaning into me. “Little boy blue blood is all grown up!”

I rolled my eyes. “You do realize he’s only a year older than you, right?”

“I’ve only seen him in pictures, Faith. Unlike some, I haven’t been graced with the younger duke’s company before this moment. Let me bask in his mighty presence.”

“He’s not a duke yet. That happens when his old man kicks it and passes down the title. And nobody is graced with that dick’s presence. He’s arrogant and so rich it’s made him beyond stupid, and he walks with a permanent pole shoved up his ass. Il duko has no redeeming qualities whatsoever,” I snapped and folded my arms across my chest to exaggerate my point.

The object of our musings hovered in the doorway to the conference room. He was conversing with Sally, our editor, and Henry Sinclair II, his father. Or, as his father was better known, King. Apparently, it was quite the amusing nickname among the British elite. Oh, how they must have chortled at the “cheeky” reference to their most famous royals. But to us, his American working-class worker bees, calling himself King Sinclair just made him sound like an entitled douchebag, too full of his own importance.

“Well I, for one, wouldn’t mind delving into those khakis the duke trainee wears so well and deep fishing for said pole in his pert, tight posterior, if you know what I mean.”

I took hold of Novah’s arm and met her eyes with my most serious expression. “It’s irremovable, Novah. That pole is wedged in deep, like oil-rig deep. You’ll need a fucking crane to hoist it out. A crane, Novah.”

Novah waved her hand in front of her face. “Jeez, Faith. Even that image has my thighs clenching.” She whistled low. “I could never be that close to his peach of a tush. I’d end up biting his firm, toned, polo-playing cheek. I know I would. Or at least give it a swift lick. I’m better off keeping my distance so as to not be arrested.”

“You’re sick.” I smirked as she crossed her legs tightly.

“Right, minions!” Sally shouted, standing at the front of the room. The staff grew silent. Our editor clapped her hands with impressive speed. She forced a smile. It wasn’t a good look on her. She appeared constipated whenever she attempted “friendly.” Or as though she were battling a mild-to-medium case of hemorrhoids.

I held my breath, waiting for more, dread seeping into the very marrow of my bones. My skin itched in irritation seeing Henry “Harry” Sinclair III stepping out from behind his father. No, I prayed, hands lowering into a death grip on the arms of my chair. I looked up toward the heavens. God, I know we’re not always on the best of terms. I drink, cuss, and enjoy fornicating far too much for your liking, but please, please, please, do not say he is here for—

“As you may have heard, Mr. King Sinclair is slowly taking a step back from the running of HCS Media Group and focusing solely on his British investments. He is still very much ‘in charge’ on the global stage, but he has decided to start delegating the US enterprises to his son, Henry Sinclair Junior.”

I closed my eyes and felt Novah’s hand grip my thigh at this revelation. “So today I have the great pleasure to welcome Henry as the new CEO of Visage Magazine and the New York Journal and everything that falls under that impressive umbrella.” The people in the conference room broke out into somewhat enthusiastic applause, and I reluctantly opened my eyes. I’d hoped if I kept them closed, this would somehow turn out to be a bad dream. But as soon as I opened them, my gaze railroaded right into Henry’s or, as I liked to call him, the eternally entitled ball-sack.

Fuck my life. What had we mere mortals done in the world to deserve three of these Henry Sinclair jerks on the planet? His father was an asswipe of the highest order, and I’d heard the grandfather, who’d created the empire, had been the worst kind of human being. His grandson had apparently followed suit. Henry didn’t smile at me. His nostrils flared and his lip curled up. I wasn’t sure if he was silently passing gas or exposing the fact that he disliked me as much as I disliked him.

King Sinclair nudged his son from his malevolent reverie. Henry pulled his hands from his pockets, nodded curtly, and instantly became the leader I was sure he had been molded to be since birth. “Good morning, I’m Henry Sinclair, but please call me Harry. Only my teachers ever called me Henry.” He smirked a little at that. I blinked slowly in confusion. I had never seen him smile. This was a barely-there smile and, no matter how brief it was, it indicated Harry wasn’t always the dour bastard he appeared to be.

“I know most of you have never met me, but I’ve been living between New York and England for the past few years and am extremely happy to be taking over here at the New York Journal and therefore, of course, Visage.” Visage was the in-house style magazine, which went out every Sunday along with the Journal’s other Sunday offerings. The in-house magazines of such prestigious newspapers had always been considered the ugly stepsisters in the world of newspaper publishing, but I loved it here. Always had…until, I feared, now. 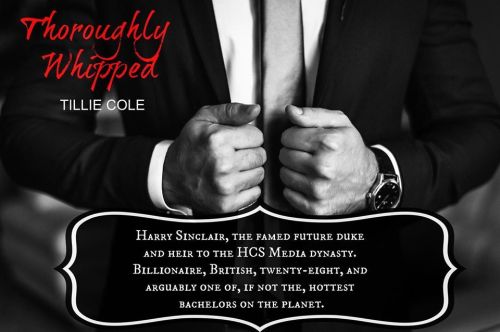 Tillie Cole hails from a small town in the North-East of England. She grew up on a farm with her English mother, Scottish father and older sister and a multitude of rescue animals. As soon as she could, Tillie left her rural roots for the bright lights of the big city.

After graduating from Newcastle University with a BA Hons in Religious Studies, Tillie followed her Professional Rugby player husband around the world for a decade, becoming a teacher in between and thoroughly enjoyed teaching High School students Social Studies before putting pen to paper, and finishing her first novel.

Tillie has now settled in Austin, Texas, where she is finally able to sit down and write, throwing herself into fantasy worlds and the fabulous minds of her characters.

Tillie is both an independent and traditionally published author, and writes many genres including: Contemporary Romance, Dark Romance, Young Adult and New Adult novels.

When she is not writing, Tillie enjoys nothing more than curling up on her couch watching movies, drinking far too much coffee, while convincing herself that she really doesn’t need that extra square of chocolate.