BLOG TOUR REVIEW AND EXCERPT: Sticking to the Script by Stella Weaver

Sticking to the Script, an all-new standalone in the romantic comedy Cipher Office series, from Stella Weaver is available now! 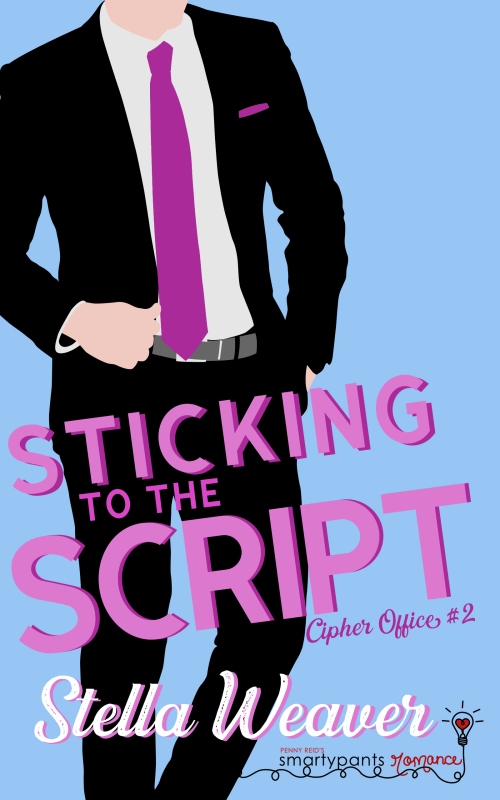 Steven Thompson had a bad year. A string of mean, kinky (the alarming kind, not the good kind), and crazy dating debacles combined with a boss who appears to be experiencing male-prenatal-psychosis means Steven’s stress levels are high. They’re so high, he’s decided to quit dating and focus instead solely on his job.

Until he meets Dr. Ken Miles.

Doctor Ken Miles is having a fantastic year. His hard work is paying off in a big way . . . professionally. But his social life? Not so much.

Until he meets Steven Thompson.

Steven isn’t so sure about Dr. Miles, but Ken is one hundred percent certain about Mr. Thompson. And even though both men know full well that the key to getting what you want out of life is hard work, they can’t seem to make them—together—work.

Will they ever get on the same page? Or just keep sticking to the same old script?

‘Sticking to the Script’ is a full-length contemporary romantic comedy, can be read as a standalone, and is book#2 in the Cipher Office series, Knitting in the City World, Penny Reid Book Universe.

Because I’m a huge fan of Penny Reid’s Knitting in the City series, I knew exactly who the main characters of Stella Weaver’s new release were, and honestly, I couldn’t quite wrap my head around how they could make a relationship work given what readers learned about both characters when they appeared as supporting characters in the Knitting in the City world.

Like Steven, I didn’t understand how or why Dr. Ken would be attracted to him when he very clearly wanted to have a relationship with Elizabeth, but as soon as I became privy to the inner workings of Dr. Ken, I was all for him proving to Steven just how into him he is and why regardless of the number of awful blind dates that Steven endured, this time around, he finally found someone who

The best part of Steven and Ken’s story is the fact that Stella Weaver did an incredible job of keeping what made these two characters them in the Pennyverse. Steven kept his snark and his wit and Ken’s protectiveness and complex mind remained. And then, Weaver gave readers even more of these two heroes’ personalities, diving deep into their histories and understand how their present lives were established.

I’ve thoroughly enjoyed the first two stores in the Cipher Office series, and the fact that readers get to catch up with favorite characters and also be introduced to new leading characters who are entertaining, well-rounded, and quite fitting for the world in which they’re placed.

“He asked you to a movie?” She blinked, nonplussed.

“Who are we talking about?” Nico asked, leaning around Elizabeth to look at me. His green eyes held a mischievous twinkle, no doubt eager to hear a new chapter of farce and lunacy in Steven’s Big Book of Dating Disasters.

Nico’s twinkle and dimple disappeared. Whether Elizabeth disliked Ken or not, I was sure Nico loathed the man. I couldn’t blame him; it was his prerogative to hate men who used to lust after his wife. He arched one raven eyebrow and asked, “How’d that come about?”

“Yeah,” Elizabeth said. “How, Steven?” Her tone was curious, but I thought I detected a little tinge of disapproval that I didn’t like.

Not wanting to make an issue of anything, I replied with an easy nonchalance. “I ran into him at Buzzy’s. We started talking about Mystery Science Theater 3000—”

“That show’s a riot,” Nico asserted, reaching for his fritter. “The reboot is pretty good, too.”

“That’s what I told DKM.” I took Nico’s lead and grabbed my own heavenly pastry.

“Then, when he found out the movie was playing at the Music Box,” he asked me if I wanted to see it. So, we went.” I shrugged.

I mumbled around my fritter bite, “You’re not missing much.”

“Little bit.” I shrugged again. That had been two, overly casual shrugs in just a few seconds and I worried I was playing it too cool. Elizabeth’s powers of observation surpassed my own. If I wasn’t careful, she’d have me giving her every last detail of the evening.

“So,” she broke in. “Are you thinking this might have been like, you know, a date?” Her brows were drawn together in concern, her words tentative.

I tilted my head in stern exasperation. “Puh-leeze. The man didn’t know who McSteamy was. I got the memo that he’s straight.”

I pursed my lips together, raised my eyebrows and gestured to Nico. “I rest my case.”

Elizabeth laughed. “I’m sorry, I just didn’t want you getting the wrong idea or anything. He’s”—she looked at her husband in apology—“he’s very good-looking, and I could see how asking you to a movie could get your hopes up.”

“Nah,” I waved dismissively. “I know what’s up. But I think we could hang out,” I volunteered without thinking. I instantly regretted my slip.

“Good luck with that,” Nico said with a laugh.

“Not possible,” he declared. Nico was a comedian, and a very successful one at that. He knew what was funny and wasn’t about to give the odious Dr. Miles any benefit of the doubt where humor was concerned.

Inexplicable annoyance spurred me to continue. “I think I might make hanging out with him a regular thing.”

“I don’t think a stiff like that knows how to have fun.”

Elizabeth grimaced at her husband’s uncharacteristic snark, then issued me a sympathetic smile. “Well, it will be good for Dr. Ken Miles. He’s not the most colorful person in the city, that’s for sure. Maybe you’ll broaden his horizons.”

Stella Weaver is a reader, writer, sloppy crafter and family-woman. She’s a native of coastal northern California who now lives on the Texas Gulf coast. She’s won the much coveted #1 Mom of the Year Award and has the coffee mug to prove it.