BLOG TOUR REVIEW: MORE THAN PLEASURE YOU by Shayla Black

Purchase your copy of MORE THAN PLEASURE YOU today!

Can I convince her our hot but temporary engagement should last forever?

I’m Stephen Lund, confirmed bachelor…and son of a successful billionaire whose sins I can’t forget—or forgive. Though he insisted I get over his transgressions, I can’t. So I put space between us with a temporary getaway to Maui. My rental’s sexy caretaker, Skye Ingram, is a beautiful distraction. Yeah, it’s a terrible time to start a fling, but I can’t help wanting to give her every bit of pleasure she’s willing to take.

When Skye needs a date to her ex-boyfriend’s wedding, I’m game to play her pretend fiancé. The jerk should see what he passed up…and that I’m holding her now. But our pretend engagement begins to feel real. Our passion certainly is. So are the consequences. When I’m confronted with the reality that our lives are now irrevocably entwined, I have to choose between leaving Skye to return to the life—and wealth—I’ve always known or abandoning everything familiar to start over with the woman who awakened my heart.

**Every 1001 Dark Nights novella is a standalone story. For new readers, it’s an introduction to an author’s world. And for fans, it’s a bonus book in the author’s series. We hope you’ll enjoy each one as much as we do.**

Add MORE THAN PLEASURE YOU to your Goodreads TBR here!

Purchase your copy of MORE THAN PLEASURE YOU today!

I’m a huge fan of Shayla Black’s More Than Words series, so any chance I get to dive back into this world is, for sure, one I can’t pass up. More Than Pleasure You is a fitting title for Stephen Lund and Skye Ingram’s story because, at first, that’s exactly what these two coming together is for – pleasure – both the giving and receiving of it. And while it might not be the best time for them to act on their crazy chemistry and mutual attraction, but the body wants what the body wants, so they embark on a vacation fling that turns into something so much more than they ever expected, which is both a blessing and a curse because not only do they live in very different worlds, but both may ultimately be giving up a huge part of their respective worlds, and what that means for this fake engaged couple who are starting to have real feelings for each other is nothing good.

Even though Stephen and Skye’s story was only a novella, there is a large amount of conflict and issues that have to be worked through, and while it’s necessary for the hero and heroine to endure some complications along the way, I feel like these two were up against too much, both individually and then as they pretended to be engaged and started developing real feelings for each other. There is only so much a new couple can take, and with the outside interferences as well as personal points of contention, I felt like the focus was a bit too much on the issues instead of what’s happening between the two of them.

Overall, I enjoyed More Than Pleasure You; I liked the multiple meanings at play with the title for the hero and the heroine and finding out just what they’re willing to do to keep things ‘pleasurable’ between them when things go from simply reveling in the pleasure that they give each other to figuring out if more pleasure comes with continuing their relationship on their terms and no one else’s.

“So you think having a fiancé will finally convince your ex’s mother to back off?”

“I hope. In her head, I’m all alone, and Finn is only marrying Dana because he’s a stubborn dumb ass. But if she sees I’ve moved on, too, I have to think she’ll give up.”

“Tell me one thing that will really convince her you’re no longer interested in Finn.”

Skye pauses. “I haven’t thought about it like that… Probably behaving unlike the way I did with Finn.”

“She was always encouraging us to kiss and hold hands. She would give us romantic weekends away. Once, when I made an offhanded mention that my period was late, she asked me—gleefully—if there was any chance I was pregnant. I didn’t have the heart to tell her no.”

No chance at all? “Not to be too personal, but did you ever have sex with Finn?”

“No. Maybe he might have tried harder if I had been more receptive. But mostly I think we both felt pushed into the relationship.”

“So you and I have to act like we can’t keep our hands off each other?”

“It’s not a problem.” At all. I reach for her hand—and frown when Skye jolts. “But if we’re going to convince anyone, especially people who have known you for years, that we’re getting married because we’re desperately in love, you can’t jump when I touch you. We have to leave them thinking that we barely managed to roll out of bed for the wedding and that we’ll probably roll right back in as soon as we’re alone.”

“You’re right. It’s just, um…been a while since anyone kissed me. I don’t count Finn.”

She pauses. “Two years and some change.”

Whoa. Skye deserves to be kissed well and often by someone desperate to make love to that pillowy pink mouth with abandon. Hell, yeah, I’ll volunteer. And if it’s been that long since anyone has kissed her, how long since someone has taken her to bed and pleasured her? I don’t ask—but I’m really fucking curious. “I did not see that coming.”

“You’re being nice.” She slides off the stool and onto her feet, shaking slightly. “So you think we should wing the whole PDA thing…or maybe practice a little?”

“Definitely practice.” I can’t help but grin. “A lot.”

I am. And that makes her very nervous.

“No maybe about it.” I flash what I hope is a reassuring smile, not one that divulges the fact that I woke up with an aching cock and her on my mind.

I stop her awkward, breathless question by kicking away from my stool. The legs drag across the tile as I stand. That’s the only sound in the room besides the distant crash of surf and her suddenly rapid breathing.

“Come here.” I crook my finger. 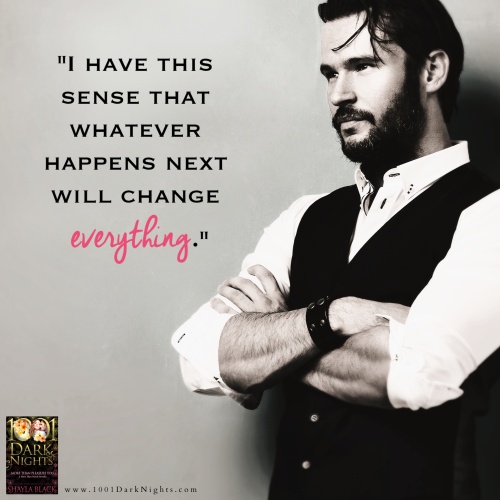 Raised an only child, Shayla occupied herself with lots of daydreaming, much to the chagrin of her teachers. In college, she found her love for reading and realized that she could have a career publishing the stories spinning in her imagination. Though she graduated with a degree in Marketing/Advertising and embarked on a stint in corporate America to pay the bills, her heart has always been with her characters. She’s thrilled that she’s been living her dream as a full-time author for the past eight years.

Shayla currently lives in North Texas with her wonderfully supportive husband, her daughter, and two spoiled tabbies. In her “free” time, she enjoys reality TV, reading, and listening to an eclectic blend of music.