“Enemies to lovers is one of my most favorite romance set ups. The two are a match made in sexy, angsty heaven.” 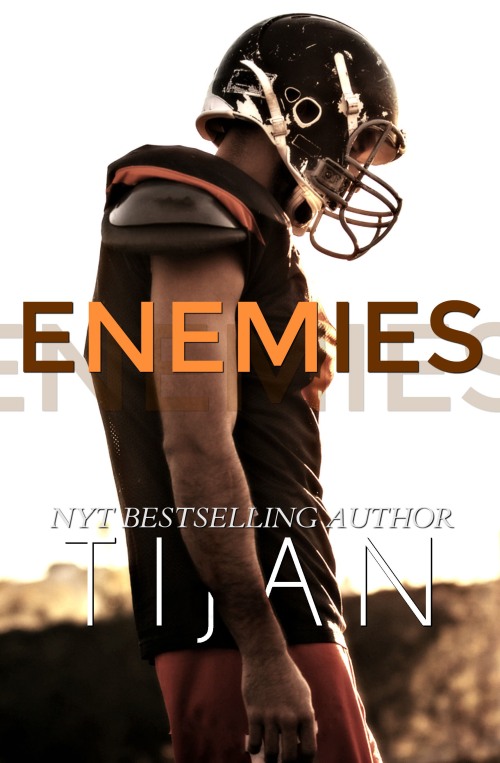 He went to a Division 1 school for football, while my father was fired by his father.

His team won the National Championship, while my mother died the same day.

He was a first round pick for the NFL …

… while I made the worst decision of my life.

Now I’m in Texas trying to pick up the pieces of my life.

But, Stone is here.

It doesn’t matter that disaster has struck my life again.

It doesn’t matter that he’s the one trying to console me.

It doesn’t matter that he’s the nation’s newest football obsession.

Because for me, he always has been and always will be my enemy. 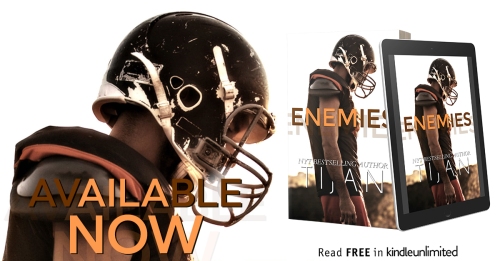 Dusty and Stone’s relationship is the epitome of complicated, and as the title suggests, what they feel for each other, especially Dusty’s feelings for Stone, illustrates nothing but the negative emotions that swirl around them – ones that threaten to implode and eviscerate any semblance of the friendship they once shared.

As I’ve learned from Tijan’s other stories that I’ve read, nothing is as straightforward as it may initially seem, not with who the characters truly are and not with the reasons that events happened in the past or are still festering in the present.

I will admit that I was caught off guard by quite a few revelations that occurred throughout the story – ones that offered the reality of the issues Dusty and Stone faced. And then, when I had a chance to see things from a different perspective than I originally had, everything fused together and provided the answers I needed to understand the hows and whys and whens of the things that drive them apart and what it would take to bring them back to what they once were and maybe help them move toward what they truly deserve to be.

The story line of Enemies is significantly more rich than I thought it would be…Dusty and Stone’s backstories as well as the differing paths they took once their friendship was destroyed and the angsty journey that followed, once they reconnected, once they faced-off against their past and their present, and once their truths were laid bare and understanding dawned on both of them, what they became was everything they should have been from the very beginning, if life would have allowed it…if Dusty and Stone would have led with their hearts instead of all of the static…the pressure…the ill-feelings between the families.

I enjoyed Dusty and Stone’s story, and while I seriously wanted to throttle both of them for their harsh words and their devastating deeds, it almost seems like it had to be this way, not saying that they deserved to go through those hellish experiences, but they had to prove they could endure…they could achieve…they could find a way to move beyond enemies to anything and everything they needed and wanted. 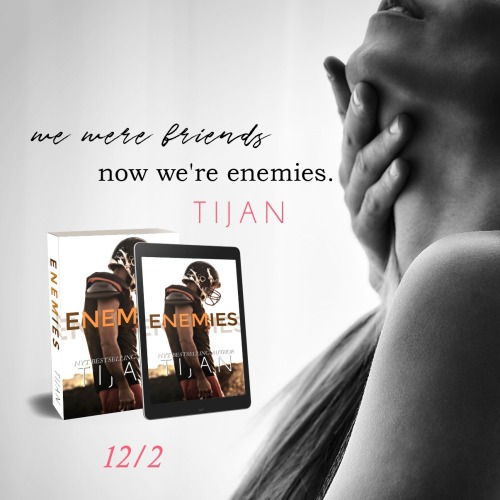 “Do not think I won’t pick you up and throw you in my truck, head first and everything. I’m two seconds away.”

I stopped and stared at him.

Shit. He meant business. He was glaring at me with eyes that said, “Do not fucking fuck with me, you fucking twit.”

I sighed. I’ll try reasoning instead. “You’re going to drive me to your house, and then I’ll pack whatever I need and call a cab to take me all the way back to where I’m paying rent. It’s not worth it. Just let me grab a cab now.”

A savage curse bit out, and then his eyes flashed.

His singular warning had been when he told me he was two seconds away. In a flash, he grabbed me, and I was airborne, right into the back of his truck. But he wasn’t done. He leapt up, grabbing the seatbelt over me, and pulled it around me, clicking it in place. He had the door shut, locked, and he was already going around the front before I could even push myself upright and then start to reach for my seatbelt.

By then, he was inside, the engine on, and he shoved off into traffic.

“You’re right. You’re being stupid.” Cursing, he ducked down as a car sped past us. They knew he was driving because they came up on his driver’s side, their phones up and ready to go. It was a car full of teenage girls. “Dammit.”

“Where do you live?”

He opened his mouth, then caught himself. His eyes narrowed in the rearview mirror. “Why?”

I just smiled. “No reason.”

He continued to study me in between still watching the road, and with a soft growl, he shook his head. “I’m not buying it. What? You’re going to tell those girls who are trying to get a picture of me?”

“What’s the difference? I’ll know when you take me to your house. What’s stopping me from posting it on Twitter, or even posting your phone number?”

A litany of curses spewed from him, and the back of his neck was getting red. I was having a heyday with this. It was more fun than I could remember having in a long time.

Until he announced it, “I liked your mom.”

“Your mom.” He moved into the far lane, settling back.

I was thinking we had a bit of drive from here, and he settled an arm back on the passenger seat headrest.

“I always liked her. She made me cookies and muffins. And I remember when she tried to teach us to bake cakes from scratch. You were horrible and your cakes tasted terrible, but we’d lie to you. Both of us.”

“You did not—” But I was remembering, and even I hadn’t wanted to taste my cakes.

A tug at my mouth. “She’d wear that ugly yellow apron. She hated that apron.”

“What? I loved that apron. Always felt like it was sunshine. Made me feel warm, even in the winter.”

I noted softly, “That’s why she wore it. For you.”

His eyes lifted to the rearview mirror, holding mine a second again. He swallowed, his Adam’s apple bobbing up and down. “Yeah.” His voice came out raspy. “She was a good woman, and a good mom. She was a good wife. I could always tell.”

I snorted. “Why? Because she wasn’t wasting away like yours?” Then, I winced. That sounded even bitchier to my own ears, more than I thought it would be. “Shit. I’m sorr—”

“Because you guys laughed.” He kept on talking about my family, ignoring what I’d so blatantly pointed out about his own, his face hard. “My parents laughed when they were drunk, and only when they had a party. When there were other people there to laugh with, never the two of them, never the three of us. I was their only kid. I wouldn’t have known better except I half grew up in your home, too, and what I remember the most about growing up was that you guys laughed.”

“Yeah, we did.” I looked out the window. A hollow feeling starting to dig in my chest. “Until she died. We didn’t laugh much after that.”

“You laughed until then?”

I nodded. I felt the chinks in my armor widening.

I remembered how he did adore my mom. The two acted as if they were conspiring together during our baking lessons, and any time he was in the house. He congregated around her. She congregated closer to him.

“You’re the son she never had.” Then, feeling bad about my shot at his mom, “Your mom cooked for us. I remember that one time she tried to teach us to make lasagna.”

He cracked a grin, barking a laugh. “You sucked at that, too. I never knew lasagna noodles could come out hard like rocks until yours.”

Fuck him, but I was grinning. I couldn’t help myself.

Those were good times, good memories before the shit ones came. And they came soon after that lasagna disaster.

He quieted. “It wasn’t the same. My mom versus yours. We had baking lessons at your house once a month, every first Sunday. My mom tried to teach us how to make Caesar salad, the only second cooking session she gave us, and that one we all got fine. It’s hard to screw up.”

“Says you. You’re perfect at everything.”

I didn’t expect him to. It was true. He knew it. I knew it. The entire nation knew it.

Then from him, “Not at being a friend.”

Hell no. No way. He wasn’t getting back in. No fucking way.

“Oh. God.” I groaned, throwing a hand up to hit my forehead. “Can we not? Can we save the dramatics until I’m able to call a cab to take me back to my place? For real. Enough bonding or whatever it is we were just doing.”

He growled, “You are such a goddamn bitch.”

I retorted, “And you are such a goddamn prick. Drop me the fuck off!”

He gunned the engine, shooting forward in traffic, and weaving until we were nearing my exit. When he took it, I relaxed. The rest of the way was tense and silent, and I knew both of us couldn’t wait to be rid of the other. Then he pulled over to the curb. He didn’t make a move, his only action just unlocking the door.

His head was turned halfway to me, his jaw clenching over and over again.

I shoved forward, my head only swimming a little bit as I climbed out of his truck. Once I shut the door and turned around, he’d already hit the engine, tearing away from the curb.

I only had the clothes on my back, on the side of the street, but I’d never been so fucking grateful to be away from him.

Now, turning to the house I wasn’t sure I was still invited to live in, I saw that all the lights were off. Lovely.

Tijan is a New York Times Bestselling author that writes suspenseful and unpredictable novels. Her characters are strong, intense, and gut-wrenchingly real with a little bit of sass on the side. Tijan began writing later in life and once she started, she was hooked. She’s written multi-bestsellers including the Carter Reed Series, the Fallen Crest Series, and the Broken and Screwed Series among others. She is currently writing a new YA series along with so many more from north Minnesota where she lives with a man she couldn’t be without and an English Cocker she adores.