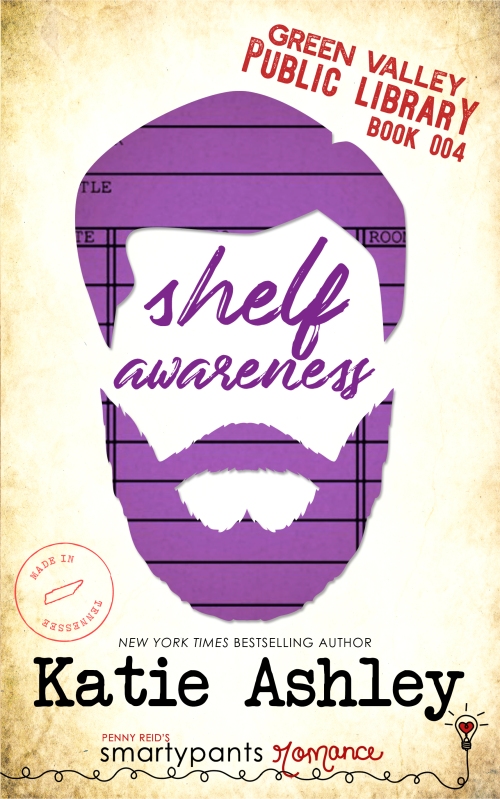 After catching her husband in a compromising position, Finley Granger finds herself in a new hell: reentering the dating world. When she moves in with her grandmother, her great-aunt, and their best friend, Finley finds herself surrounded by a trio of well-meaning yet bumbling matchmakers.

In spite of their efforts, Finley only has eyes for one person, and that’s Zeke Masters—the 6’4”, impossibly built, and ridiculously good-looking new man in town. Along with her nether regions, Finley’s journalistic spidey-senses tingle as to why he’s on sabbatical from Seattle. Is he on the lam or escaping a bad breakup? What’s his story?!?!

As Finley finds herself reluctantly drawn to the gorgeous IT guy, she can’t help but wonder: should she indulge in a rebound tryst with the mysterious Zeke, or has she finally met her match?

‘Shelf Awareness’ is a full-length contemporary romantic comedy, can be read as a standalone, and is book #4 in the Green Valley Library series, Green Valley World, Penny Reid Book Universe.

Green Valley, Tennessee, gets more and more interesting every time I dive back into this world of Winston Brothers and the citizens of this southern town, and the fact that readers get to meet so many other charismatic characters from different walks of life makes this a Smarty Pants Romance Series must read.

If I had lost my way in life or faced a life-changing incident that meant a second chance was in order, I would hope I could find a town like Green Valley – one that was welcoming and endearing, regardless of the number of busy bodies attempting to help you in a number of hilarious and ill fated ways. And let me just say that Finley Granger’s grandma, her great aunt, and their elderly friend have nothing but the best intentions, even though they epically fail more than help, but it sure is fun watching these three care enough about Finley to go overboard to help her find her happy. They definitely were a great sense of comic relief and the fact that they were smart as whips and always had a witty retort and colorful commentary at the perfect time.

I have to wonder just how big the Green Valley library is because there always seems to be someone else getting hired or volunteering their services, like IT specialist Zeke Masters, who remains quite the allusive guy for much of the story, not learning much about him until it’s deemed necessary, but it’s the journalist in Finley that requires more information about him, but not just because he’s a mystery or even the perfect rebound from her cheating husband, but he’s a genuinely good man who can be exactly who Finley needs, and even though it takes a bit of time and a heck of a slow burn, when everything is said and done, things work out exactly how they should, making these two big city dwellers, a perfect pair for small town living.

As Zeke worked on uploading the census records, I hoisted one of the many boxes from the Henderson’s donation onto the table. It kicked up an epic dust cloud. I reached inside to pluck out one of the moldering tomes of historical literature. Wrinkling my nose, I fought the urge to sneeze. Instead, I cleared my throat. When it still felt like I had swallowed a wad of sawdust, I coughed. And that was my grievous mistake.

The force of the cough dislodged the Ben Wa ball, sending it into an epic downward dive. Yes, ladies and gentlemen the Ben Wa ball had left the building. Whirling away from Zeke, I used my hand to try an inconspicuous crotch shuffle to send the ball back to its point of origin. What happened next was truly against the laws of motion. Because the universe apparently hated me, the ball escaped the confines of my thong. As it started its descent down my thigh, I squeaked and clamped my knees together.

“Are you all right?” Zeke asked behind me.

I threw a glance at him over my shoulder. “Uh, yeah, I . . .” Okay, I had no idea how I was going to get out of this one. It wasn’t like I could say, “Well, here’s the thing. The Ben Wa ball I was using to strengthen my pelvic floor muscles to keep my vagina healthy for the D just slipped out and is about to make a very unhappy trail down my leg.”

“I think a bug bit me or something.”

“I think I might’ve found something interesting for your research.”

The only thing I was interested in at the moment was getting the Ben Wa ball out of my pants without Zeke seeing it. “Oh?”

Damn him for being enthusiastic about my research. The last thing I wanted to do was walk the couple of steps back over to him while trying to keep a Ben Wa ball from rolling down my pants leg. Since I couldn’t see any other way out of it, I nodded. Gritting my teeth, I started shuffling over to him.

When I started lurching like Frankenstein’s monster, Zeke tilted his head curiously at me. “Are you sure you’re okay?”

Just as I reached his chair, my knee shifted because of what I imagined was panic sweat overtaking me. As the ball became dislodged, I bit down on my lip to keep from squealing again. There was no saving the ball now or my humiliation for that matter.

As soon as it plopped onto my shoe, I flung my foot, sending it ricocheting into the desk. Of course, it’s size caused it to make a tremendous ching-ching noise, which in turn caused Zeke to rip his attention away from the screen. “What was that?”

“What was what?” I questioned innocently.

He furrowed his brows at me. “You didn’t hear that noise?”

Ignoring my response, Zeke quickly assessed the area around us. After I’d flung the ball away, it had come to a rest to the right of his desk chair. When he bent over to examine the ball, I inwardly began screaming noooooo while at the same time cursing Estelle for even bringing the Ben Wa ball into my orbit.

Since the universe hadn’t tortured me quite enough yet, Zeke picked up the ball. “Interesting,” he murmured as he twisted it between his fingers.

I decided it was best to play absolutely and completely clueless in this situation. “What is it?” Silently, I prayed he wouldn’t respond with, “It looks like one of those sex balls you shove up your cooch.”

“I don’t know. Maybe a part off one of the desks or chairs. I should probably give it to maintenance, so they can check all the furniture in here.”

Oh hell no. Without a second thought, I snatched the ball out of his hands. Since I did it rather abruptly, Zeke’s surprise was apparent on his face. Waving my free hand dismissively, I said, “Don’t bother yourself with that. I’ll take it to them.”

After wheezing out a breath, I replied, “You’re welcome.” I jerked my thumb over my shoulder. “I’ll go do that right now.”

I didn’t bother waiting for Zeke to reply. Instead, I power walked right out of the history room. I’m sure if he was watching me he would have been puzzled at my miraculous recovery, considering I’d been limping earlier.

At the first trash can I could find, I deposited the Ben Wa ball. It seemed abundantly clear that neither I nor my vagina were quite ready to handle the responsibility.

Katie Ashley is a New York Times, USA Today, and Amazon Top Five Best-Selling author of both Indie and Traditionally published books. She lives outside of Atlanta, Georgia with her daughter, Olivia, her two rescue dogs named for Disney Princesses, Belle & Elsa, an out-numbered cat, Harry Potter, and one Betta fish. She has a slight obsession with Pinterest, The Golden Girls, Shakespeare, Harry Potter, and Star Wars.