BLOG TOUR REVIEW AND EXCERPT: Dream With Me by Kristen Proby

Dream With Me by Kristen Proby 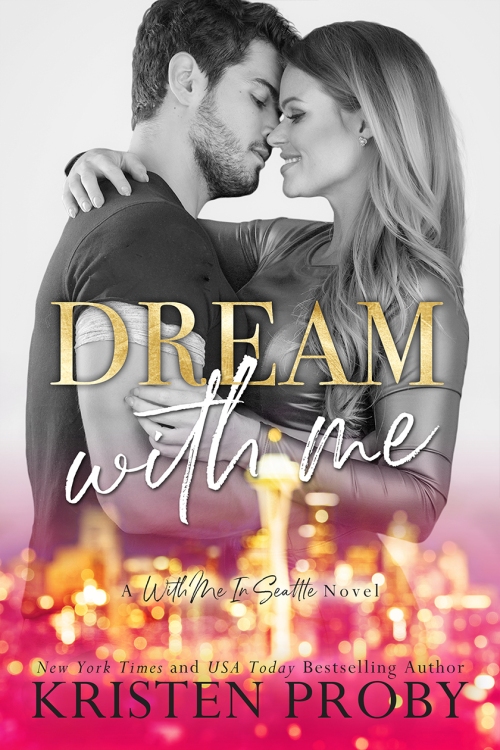 Dream With Me, an all-new standalone contemporary romance in the beloved With Me In Seattle Series by New York Times Bestselling Author Kristen Proby.

Kane O’Callaghan knows what it is to have his work shown all over the world. His pieces are on display in palaces and museums, including the O’Callaghan Museum of Glass just outside of his beloved hometown of Seattle. Kane is a bit of a recluse, spending time on his farm alone and committed to his art. His life is full.

Until the day he meets her.

Wandering through museums is Anastasia Montgomery’s favorite way to spend her time. Not only does art feed her soul, but it inspires her own art of designing wedding cakes. When her muse seems to be gone, she finds her again among the beauty in the museums of Seattle, and the O’Callaghan Museum of Glass is her favorite. She’s never met the artist, but he must be absolutely brilliant, if he can make such beautiful things out of glass.

Bumping into a grumpy stranger at the museum wasn’t in Anastasia’s plan. And then discovering it was Kane himself was absolutely humiliating.

But when she sees him again at a charity fundraiser, and ends up spending an incredible, unforgettable night with the mysterious glass smith, Anastasia finds herself thinking of Kane and little else, even her precious work. Will this relationship bloom into the romance of a lifetime, or will their dreams of success get in the way of true love? 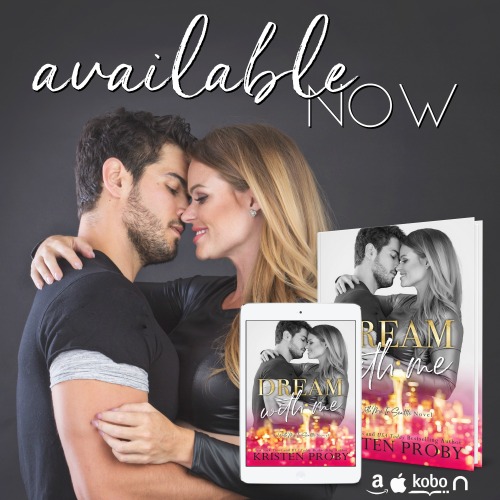 Dream with Me, the title of Kane O’Callaghan and Anastasia Montgomery’s story, focuses on accomplishing goals and living out their dreams, however that might be. What I found most interesting in relation to the title is the multiple connotative meanings that come into play with the word dream. And what’s also intriguing about that is the fact that they both were so focused on their careers that they never really dreamt of anything else…until they saw each other. And as their dreams begin and continue to change, Proby makes sure that these two characters understand and are open to the fact that their lives should be about more than their work, even though it’s a creative outlet for both of them.

Kristen Proby plays out the idea of kindred spirits and builds upon the unexplainable connection that Kane O’Callaghan and Anastasia Montgomery feel toward one another early on in their ‘relationship.’ I loved that even though there was chemistry between them from the start, Kane had to work a bit in order to show Anastasia who he is beneath his reclusive and business focused persona. After he redeemed himself, though, what they feel for each other grows exponentially, clearly illustrating the idea that dreams can change and lives can be made even more complete with the right outlook and push to live and love just as devotedly and just as deeply as their feelings are about their careers.

A significant aspect of each story in the With Me in Seattle series is the importance of and support of family, and that idea rings true in Dream With Me. I loved getting know Kane’s family, and the way that Proby set everything help it seems like there’s a possibility that some of his family members will have their stories told, at least I hope it’s true at some point.

Kristen Proby’s Seattle crew are some of my absolute favorite characters, and from my perspective, this series can continue as long as Proby wants it to because I’ll never get enough of these swoon worthy stories that focus on how two people are bonded together by an all-consuming love – one that doesn’t come without its obstacles, but one that is worth fighting for and understanding that all couples must endure struggles, but what makes Proby’s couples weather the storms, holding on tightly to a love they’ve never known or had before, is the fact that once they fall, they’ll do anything  to cherish and protect the person who owns them heart and soul. 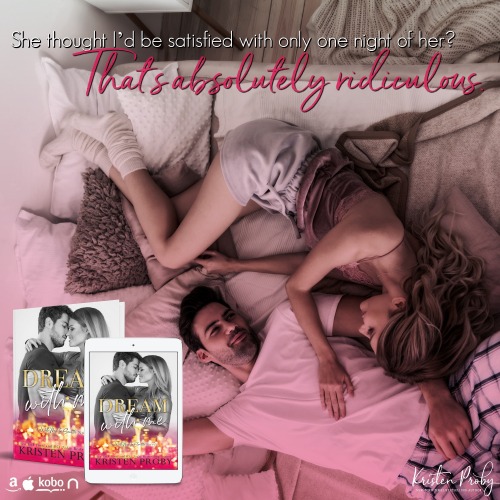 Okay, so the man has moves. It shouldn’t surprise me that someone who creates such amazing works of art can also lead a girl around the dance floor. With one palm firmly planted on my lower back, and the other clutching my hand, Kane keeps his eyes on mine.

“You’re nervous,” he replies softly. “There’s no need to be. It’s just a dance.”

I take a deep breath and offer him a smile. He’s right. It’s just a dance.

The fact that he’s maybe the hottest man I’ve ever seen is a huge bonus.

And if he can move like this, with all of our clothes on, I can only imagine what it could be like if we were naked.

“I never got your name,” he says and guides me closer to him so we can talk into each other’s ears. I glance around the room, seeing my sister and the other girls smiling at us, watching us dance.

“Anastasia,” I say and turn my head, not quite planting my nose against his neck. The smell of this man is going to kill me.

And not because it triggers my asthma.

Because it’s too sexy.

I watch the pulse in his neck and enjoy the feeling of his strong arms holding me.

“That’s a lovely name.” The accent is thicker in his voice now. Irish? I’m not good with accents, but I’d bet he’s Irish.

The song ends and flows into another ballad. Adele sings about finding another lover, as Kane moves against me, with me.

I wonder if it looks as sexy as it feels.

“You said yesterday,” he whispers against my ear, “that you’d be using your sketch for something else. What will that something be?”

He pulls back far enough to smile down at me in surprise. “A cake, is it?”

I nod, more comfortable talking about what I do for a living than just dancing in silence.

“I design and build wedding cakes for a living. I can do them for other occasions, as well, but wedding cakes are what I’m known for.”

“I have a client who came into my shop about a month ago to hire me. They didn’t give me any direction at all. No colors, no requests. It just has to feed about two hundred guests.” I shake my head in disgust. “Not that I want them to tell me to copy a photo. I won’t do that, but usually, they have colors they like or flowers in mind. Something. Not these two. When I need inspiration, I like to look at what others have created. Or have conversations with people I enjoy.”

“That makes sense,” he says and leans in to kiss my forehead, which sends a shiver right down my spine to my lady parts—which had already sat up and taken notice of Kane.

“An apology,” he replies. “For being difficult yesterday.”

His lips quirk into that half-smile, his green eyes shining. The song is almost over, and I know I should thank him for the dance and find Lia and the others.

“Thanks for the dance.”

The last note plays, and I pull back, immediately wishing I was back in his arms.

He’s a stranger, and it’s crazy, but it’s true.

“Do you belong to a man, Anastasia?” Kane brushes his knuckles down the side of my cheek.

I frown. “I’ll never belong to anyone.”

“You know what I mean. Are you taken?”

“Good.” He kisses the back of my hand.

Kristen was born and raised in a small resort town in her beloved Montana. In her mid-twenties, she decided to stretch her wings and move to the Pacific Northwest, where she made her home for more than a dozen years.

During that time, Kristen wrote many romance novels and joined organizations such as RWA and other small writing groups. She spent countless hours in workshops, and more mornings than she can count up before dawn so she could write before going to work. She submitted many manuscripts to agents and editors alike, but was always told no. In the summer of 2012, the self-publishing scene was new and thriving, and Kristen had one goal: to publish just one book. It was something she longed to cross off of her bucket list.

Not only did she publish one book, she’s since published close to thirty titles, many of which have hit the USA Today, New York Times and Wall Street Journal Bestsellers lists. She continues to self publish, best known for her With Me In Seattle and Boudreaux series, and is also proud to work with William Morrow, a division of HarperCollins, with the Fusion Series.

Kristen and her husband, John, make their home in her hometown of Whitefish, Montana with their two pugs and two cats.